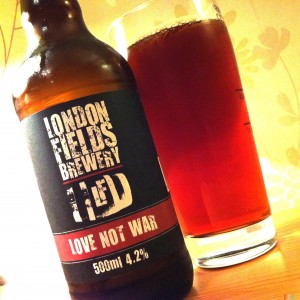 Love Not War is a red ale that looks warm and deep and lovely in my glass.
It smells of toffee apples and, ever so slightly, dandelion and burdock.
Everything here is autumnal and rather warming with lots of burned sugar candy, deep treacle toffee, and lots of apple and pear juice.
But it’s the super hops that win the day for me.
They’re exceptionally dry and bitter while being full of sweet loveliness.
Crunchy red leaf litter, birch bark and hedgerow spikiness, imagine brambles as a drink, all pointy sharp and woody, but rather exciting and very refreshing.
Supposedly this beer was first brewed during the London riots of 2011, hence its name.
But it doesn’t taste of the city to me, instead this is a lovely winter morning walk down English country lanes, fresh, earthy, and very satisfying indeed.