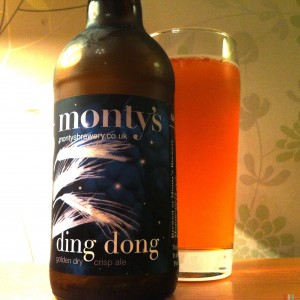 I would quite like somebody to explain to me what makes this a christmas beer as it just tastes like a slightly flat, though not unpleasantly so, run of the mill golden ale to me.
Ding Dong pours a weak gold with next to no head.
The smell is straw, sweetcorn, a very feint fruitiness and a touch of yeast, and the malting follows suit with half hearted caramel and traces of Frazzles.
There’s a reasonable dryness to the hops, but a distinct lack of flavour.
Just the minutest whisper of something bitter sweet and lemony.
And what exactly does “A Champagne Style Real Ale” mean anyway?