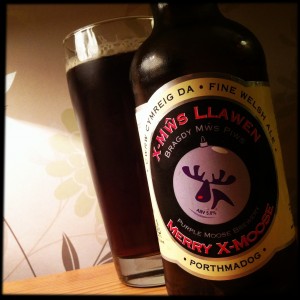 This is, you won’t be shocked to find out, Purple Moose’s Christmas beer and it tastes upsettingly familiar.
Why upsetting?
Well, this tastes almost, almost, identical to their Dark Side Of The Moose.
The only real difference I can discern, and feel free to send me a recipe to prove me wrong, is a slightly higher ABV which makes the beer that touch warmer in your mouth.
That said, being Dark Side Of The Moose in a different bottle isn;t altogether a bad thing.
I quite like Dark Side’s Rolo fuelled rum and raisin filled malty chewiness.
And I like the vaguely herbal spicy hops.
But I really do find this kind of thing disappointing.
It’s like the endless bottles of “Olympic” beer this summer that were simply re-badged brewery standards, and there were more than a few.
Tasty and disappointing.