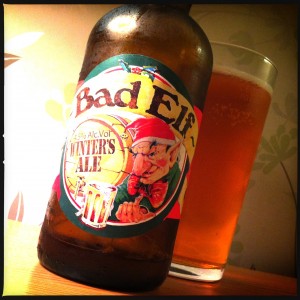 This is an odd one.
It’s another beer from this year’s Great British Beer Hunt and I’m not sure what I make of it.
The aroma is infinitesimal, with just the merest waft of bran and straw, and though the beer is a very nice honey colour its head is gone as soon as it arrives.
I can’t work out why this is a “Winter’s Ale” as it has none of the spice or herbal flavours one might expect from such a beer, nor does it have a high alcohol to warm you through on cold winter’s nights.
What it does have is a weird biscuit malt that tastes a little like bran flakes and Brussels sprouts, which as an aside has started to appear in the aroma as the beer warms up.
There’s a very nice sticky English honey in here and plenty of hedgerow greenery in the hops along with a little pear juice filling in the background.
But it’s the sprouts I can’t get my head around.