Posted on November 7, 2012 by Simon Williams 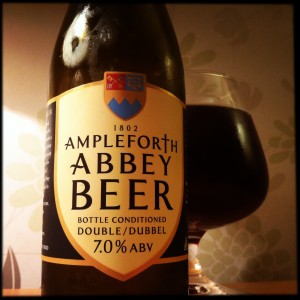 After years and years of England not having an abbey brewed beer Ampleforth, who are well known for their cider, have been getting a fair bit of hype in the beer press because they have brewed an abbey ale.
The thing is, this is actually brewed and bottled by Little Valley Brewery which I’m pretty sure means that this isn’t quite what it makes itself out to be.
But that’s not even the main issue for me.
I’m not going to get pedantic about whether being brewed by monks or near monks constitutes an authentic abbey (or Trappist as the tasting notes on the bottle mention) beer because the main problem I have with this beer is that it isn’t very good.
Ampleforth Abbey Dubbel has a bunch of flavours associated with the Trappist beers it alludes to, but everything’s a bit limp and lifeless.
The beer pours a nice raisin flesh purple brown but holds no head and looks rather flat.
The aroma is fizzbombs and sultanas and taking a mouthful you get liquorice and treacle, some chocolate and a splash of rum and raisin.
But everything is watery and as a result disappears almost as soon as you taste it.
There’s no lasting richness that you get in a Trappist beer.
None of that thick meatiness, that complexity of character that makes Trappist beers so loved, instead it’s just washes of flavour with no real body that makes this completely unconvincing and rather disappointing.
Equally upsetting is that at the price I paid for it I could have bought a really great little Belgian number and had change left in my pocket.
I sense the marketing men winning the day here and that’s a great pity.