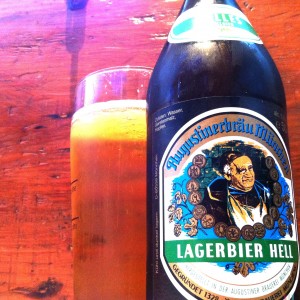 It would appear that even though I know and love this beer I’ve not written about it before, so here goes.
This is one of the first beers I got from The Offie in Leicester and it helped change the way I viewed lagered beer.
Pouring a glowing pale gold Lagerbier Hell smells of grain and herbs, apple juice and spice.
This is a beer with a big lemony punch, a real zing that sparkles as you drink.
The malts are runny honey soft and full of apple juice along with some lychee dryness.
The hops are zesty citrus and a big bag of mixed herbs, some mint freshness and rosemary woodiness that pops and snaps with spicy goodness before a long dry super clean finish.
It would appear that Augustinerbräu concur wit AC/DC that hell ain’t a bad place to be.

One Response to Augustinerbräu Lagerbier Hell (5.2%)