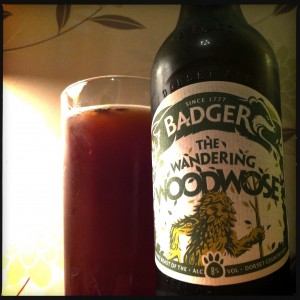 This is one of Badger’s seasonal limited editions named after the wild men of Dorset folklore.
I was warned that its yeast is a bit feisty and so I left it a couple of days to settle after it arrived, but even then it poured like a thick yeasty fog with no head whatsoever.
Not a great start.
The aroma here is apricots and almonds, nutmeg and raisins, which is rather nice, and on taking a mouthful you immediately know that this is a big beer.
Tart cooking apple homeliness and brandy warmth work through you and heat your belly, meanwhile there’s a big boisterous malty biscuit covered in gloopy toffee and flecked with freshly crushed peppercorns to get your mouth around.
You also get a really bright and tangy, citrus tinged, rather English hazel wood and headgerow jam hop that prickles and pinches, stings and slaps with bramble spikes and blackberry leaf pith.
Wandering Woodwose is spoilt for me by its feel on my tongue.
It’s a bit thick and claggy, probably due to the yeast as mentioned at the start.
But that’s the only thing that stops this being a really good beer.
If you see it, buy one and let it stand for about two weeks before pouring it as gently as you possibly can.