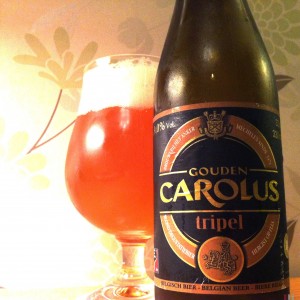 After a bad pint, which is what I’ve just suffered, this is like the nectar of the Gods.
Carolus Tripel pours with the most ridiculously large foamy head and smells of bread dough and flowerbeds.
There’s a sugary sweetness that borders on sickly but is just about kept in check by the bitter dry crispness of the hops, and so you get a blend of super sweet biscuity caramel and leafy fresh lemon rich bitterness.
The weight of the alcohol heats you through and provides a brandy smack on your tongue that is really rather lovely.
Brewed for the Knights of The Golden Fleece in 1491, this is an ancient beer that tastes every bit as modern as and alive as many of our exciting new brewers are attempting and, after a bad pint, it’s an absolute marvel.