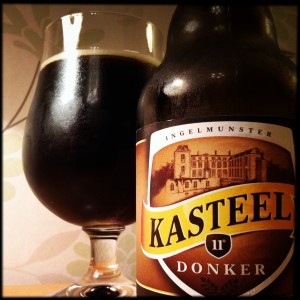 Oh my.
This came as part of my latest Beer Club box from Beer Hawk and is easily the best beer I’ve had from this brewery.
It’s a deep and dark purple brown beer that smells of prunes, rum and nail varnish, and taking a mouthful is an enormous hit of booze heavy fruity goodness.
You get a malt that’s biscuit rich and doused, almost drowned, in rum and brandy.
Then there’s huge washes of prunes and damsons in a sugary trifle sherry.
All this is being stirred with an enormous cinnamon stick coated in liquorice, crushed peppercorns and mace.
Towards the end the hops are red and leafy, crunchy and dry.
Kasteel Donker is a big beer full of flavour that’s far too easy to glug given its strength.