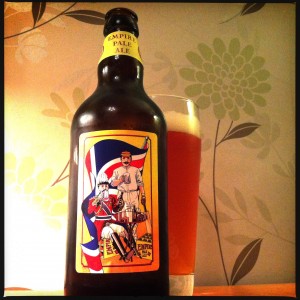 Call me a pedant but I hate bad spelling, especially on something that could easily be spell-checked.
This beer’s label has two misspellings, and it’s a shame as I really like the way that this beer is presented.
Empire Pale Ale is a big meaty beer that pours a nice orange marmalade with a big fluffy head.
Sadly, I fear I may have a bottle with a bit of a yeast infection as there’s a bit of a vinegar bordering on Lambic hit to the aroma.
What I can smell and taste through that though is a heavily hopped and beautifully malted IPA.
There’s deep rich honey and toffee, a super spicy pepper hit and super bitter hops that go on forever.
Sadly though, this bottle definitely suffers from an infection that’ll need a doctor.
Unless of course Burton Bridge are after a wild yeast, Belgian twist to their Empire Pale Ale.
But I doubt that somehow. 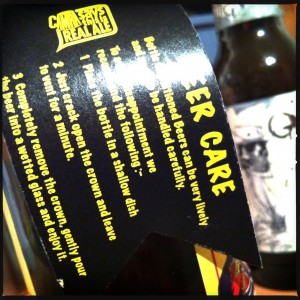 And all this is made a little ironic as Empire Pale Ale comes with a tag around its neck telling the drinker about how to care for beer.
All this said, I will definitely be getting another bottle as I can definitely sense something really good lurking behind the bad wine vinegar badness.
That, however, would be little consolation to someone who may have bought this as their first dip into the world of Real Ale, as someone pointed out on Twitter last night, they’d take a sip and go straight back to their homogeneous lager.