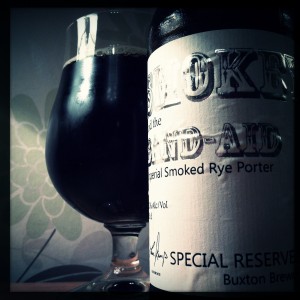 Part of Buxton Brewery’s Special Reserve Series, this is an Imperial Smoked Rye Porter.
And what a beer it is.
Smokey And The Band-Aid sits in the glass all black and mysterious with just the lightest trace of a head.
The aroma is smokey bacon, damsons and pumpernickel, big and full and overwhelming in the most sensuous way.
It’s a little difficult to talk about what the malts and hops are doing as this is one of those beers that’s far more than the sum of its parts and I found it a very personal experience.
What this beer gives me is prunes and coffee, dry as a bone redwood leaf litter, all crunchy and crisp and a whole load of smoke that smells and feels like the burning off of woodland litter that I used to smell up in the woods around the Wrekin when I was young.
I’d run around having adventures and climbing trees and there was always the smell of earth and smoke drifting from the surrounding farmland.
To me this beer is that, plain and simple.
Rich fulfilling, malty rye goodness and the feeling of the outdoors in front of a camp fire.
You’ll have your own experience with Smokey And The Band-Aid, or you may just think it’s beer.
But if it is just beer, then it’s damned good beer.