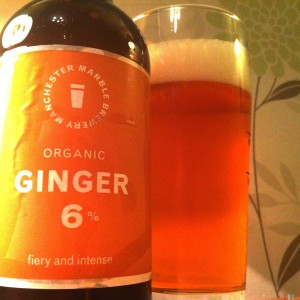 I’m not a big fan of ginger beer and so when I saw this in a mixed case I received I was a little nonplussed.
And reading “Fiery And Intense” on the label put me off further.
But I was wrong.
As I often am.
Marble’s Organic Ginger is a rather fine bottle of beer.
It opened with a volcanic flow of lava-like foam that I struggled to tame and gave off a smell of ginger biscuits and brandy snaps.
There’s a very nice sticky toffee, vanilla and pepper in the malts, and the hops are floral, citrus tinged  and dry as a bone.
The ginger isn’t overpowering which is what I’d feared.
Instead it’s a spiky warmth that permeates the whole beer.
It doesn’t shout and scream, but prickles your tongue and pinches at your cheeks and generally adds an extra dimension to an already pretty good golden ale.
Impressed?
Me?
Yes actually.