St. Austell Brewery: A Reminder To Myself

Way back in 1995 I was twenty five years old and had just been made redundant, my daughter (who these days likes to have a drink with me) was a year old, and I had some decisions to make.
I decided that I wanted to do a degree as I’d not quite got that far in my teens, being more focussed back then on growing dreadlocks and being in a band and buying ridiculously obscure records. 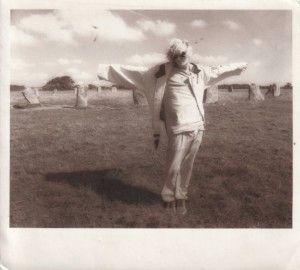 Blonde dreadlocks and a fisherman’s coat.
Life as an Art Student in Cornwall in the mid 90’s occasionally got a bit pretentious.

I applied for places on courses at Durham University and the then tiny Art College of Falmouth in Cornwall, subsequently to be reborn as University College Falmouth with a huge new campus.
My choices were a degree in Anthropology and Archaeology (Durham) or Cultural Theory (Falmouth).
Durham turned me down as I didn’t have the necessary A Levels but Falmouth offered me a place based on my previous experience as a small press publisher, record label owner and concert promoter.
And so it was I spent five years living in Falmouth and drinking in its pubs.
The Quayside was a regular haunt, a large pub on two floors that did cheap food and had a decent mix of Real Ale, along with Jacob’s Ladder and The Seven Stars to name but three.
I distinctly remember a beer festival at The Quayside for two reasons.
Firstly I walked in through the low doorway of the pub forgetting I’d got my baby daughter on my shoulders and she gracefully tipped backwards as her head banged on the lintel.
And secondly it was the first time I’d seen the name Snecklifter which became the title of one of my old band’s songs. 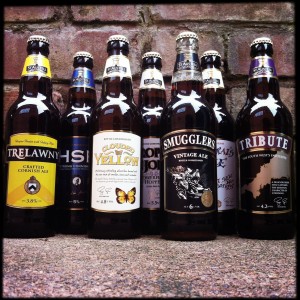 But in terms of beer what I really remember is that I could always count on the St. Austell Brewery for a decent pint, and so while looking through some old photographs and getting all nostalgic I decided to get hold of their core range and work my way through it.
One or two of these beers I get reasonably regularly anyhow and have written about before, but there are a couple that I’ve either not had for years or have never, to my knowledge, tried and the conclusion I’ve come to is that, along with Fuller’s and Adnams, St. Austell are one of the big breweries that try hard to do the right thing.
The good beer thing. 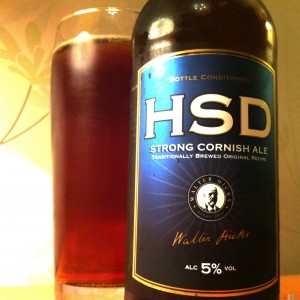 HSD (Hick’s Special Draught) (5%)
HSD is a dark amber beer that smells of toffee and damsons and, ever so slightly, of cola.
Named after Walter Hicks, St. Austell Brewery’s founder, it’s kind of a session beer for those of us who like an extra kick.
So, that’d be me then.
All the flavours are big but none of them are overpowering.
There’s a nice strong toffee and raisin sweet richness coupled with a tart tamarind and crunchy black pepper spicy sourness.
Then there’s a malted fruit loaf body that’s big but not heavy and this leads into a very nice and snappy citrus dryness that’s equal parts orchard fruit roundness and lemony twang. 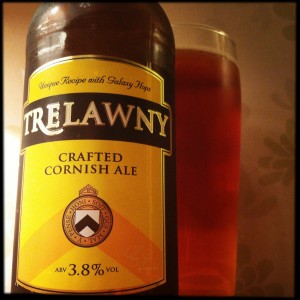 Trelawny (3.8%)
For a beer so light in ABV there’s plenty going on in here.
Trelawny, at a guess, is named after Sir Jonathan Trelawny, one of the seven bishops put in the Tower Of London by James The Second, and is a deep copper orange with a nice sweet caramel, mustard, apricot and carrot (yes carrot) aroma.
There’s a lovely big toffee sitting at the heart of this beer.
It’s soft and round and hefty, and it sits there quiet and self assured, creating a good burned sugar backbone.
The inclusion of Galaxy hops adds a nice citrus and peach zing to the more traditional English hedgerow of the Goldings, with blackberry leaves, a little orange marmalade, prickly black peppercorns and lemon rind.
As you move down the glass and Trelawny warms you get an added layer of aroma with some soft apple and more peach coming through, and the finish is tingling and dry.
This is a very good session beer and I’d be more than happy drinking this all evening. 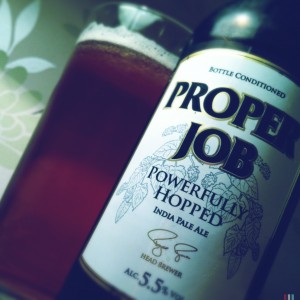 Proper Job (5.5%)
During the 90′s I lived in Falmouth, Cornwall and I had two pubs on my doorstep and right next door to each other.
One always had Sharp’s Doom Bar on and the other was, if I remember correctly, a St. Austell pub.
This bottle reminds me of why in those days I preferred the St. Austell brews.
What a super bottle of beer this is.
In your glass you have a delicious looking copper orange beer with a light head.
The smell is full of hedgerow after the rain, orange rind and a pinch of yeast.
The beer feels good in your mouth, thick and chewy, but fizzy and fresh.
You get a really good malt full of all the best bits of eating a Daim Bar, caramel, almonds, a hint of salted chocolate.
It’s biscuity and malty and satisfying and yet that’s just the backbone for the hopping.
Oh man, the hopping is big and angry, fiery and fun.
Spiky black pepper corns, crushed and mixed with lemon rind and grapefruit.
The hops bring out a lovely green hazelnut dryness that you’ll instantly recognise if you’ve ever been playing “up the woods” as a child and tried eating what you see squirrels eat.
It’s delicious but extremely dry, rubbing all the moisture from your mouth and leaving you puckered in the most pleasurable way.
I could go on, but I won’t.
Suffice to say, Proper Job is a proper job.
(NB: This review originally published March 2012) 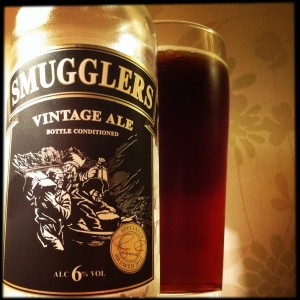 Smuggler’s Vintage Ale (6%)
I wrote about this beer before and gave it a very bad review.
It was mainly based around the fact that Smuggler’s Vintage Ale comes in a clear bottle and you could tell.
This one appears to be either freshly bottled or kept wholly in the dark, because this is like an entirely different beer.
There’s still very little in the way of aroma, just a light waft of caramel, but taking a sip is an entirely different proposition.
This bottle of Smuggler’s Vintage begins with a large caramel and tamarind slap, and that’s the tamarind I used to eat fresh in Jamaica and not the weird sauce of various UK Indian restaurants, it’s round and warm and sappy and bitter.
The malts are rich and sweet and satisfying, full of thick toffee and a little smoky bacon.
There’s a dry autumn leaf hop that crunches over all this and leaves a long honeyed finish that is doused in rum and raisin and wiped clean with mown grass and lemon rind.
Personally I think that this bottle, compared to the previous one, is the perfect example of why clear glass is such a bad idea.
Yes, they make the beer look nice on the supermarket shelf but the difference between a fresh bottle and one that’s been out a while is enormous. 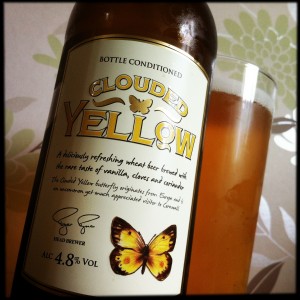 Clouded Yellow (4.8%)
Brewed with vanilla, cloves and coriander, this is quite a feisty wheat beer.
It pours a shining light gold and gives a large foamy head, but this quickly collapses into a nice ring of bubbles.
The smell is fresh lemon juice, honey and a little spice.
The vanilla here acts as a background, a canvas if you like, on which the other flavours can show themselves.
There’s a soft, creaminess from the wheat and the smack of cloves that gives a fresh, almost medicinal herbal quality that’s very reminiscent of those sweets your grandfather always had and that I for one loved even though they’d turn my face inside out.
The Willamette hops give a floral lemon peel zing with a peach softness and they lead you into a finish that’s sharp, bitter and deliciously long. 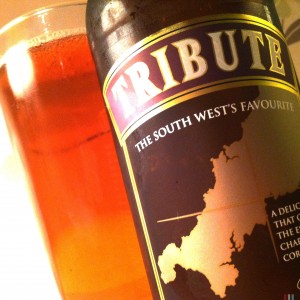 Tribute (4.2%)
This used to be a regular for me back in my Cornwall days.
Tribute is an amber beer that smells of caramel and biscuits.
It may not be the most exciting beer in the world, nor is it the best in St. Austell’s range, but it certainly has its charms and is so easy drinking that it’s no wonder so many people enjoy it.
Tribute is a really decent Bitter with a nice big toffee and digestive malt, a good dose of peppercorns and some nice floral, almost lavender hints at the back.
`the hops are honey and elderflower, some lemon juice and a dry green hazelnut roundness that leaves a good bitter, dry finish.
As I say, not the best beer in the world, but a really decent standard for the pub or your fridge. 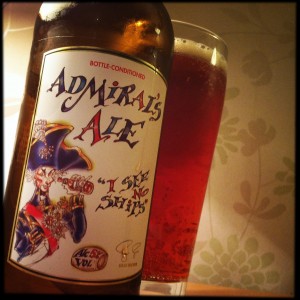 Admiral’s Ale (5%)
Admiral’s Ale was brewed to celebrate the anniversary of Nelson’s victory at Trafalgar and it’s rather nice as it goes.
It pours a warm chestnut brown with a loose foamy head and the smell is a little bit fruit crumble and bran biscuit.
This is a toffee rich beer, heavy with sugary caramel and a large digestive biscuit backbone.
There’s a good prickly spiciness too that really pops on your tongue and makes you take notice.
RIght in the middle you get a dried fruitcake mix, orange rind and lemon peel, and squishy sultanas before the splendid elderflower dry hops slap you about and offer you a honey and raisin finish that’s plump and fruity, fizzy and dry.

One Response to St. Austell Brewery: A Reminder To Myself