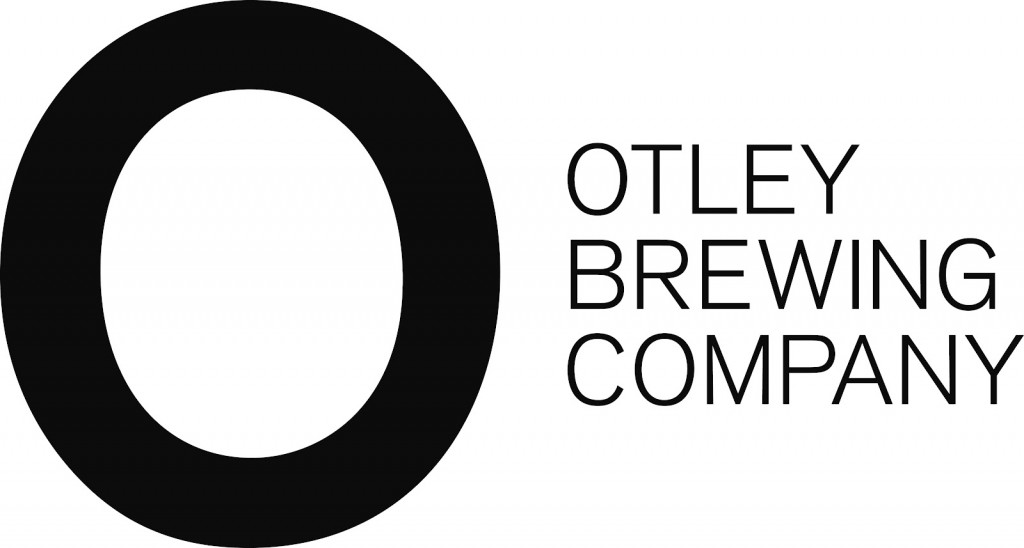 It’s a funny thing.
Nick at The Otley Brewing Co. has been a member of our little organisation for quite some time and yet I’d never gotten around to talking to him about his beer until now.
There’s something about Otley that I find effortlessly cool.
It starts with the way their beers are presented, whether on tap or in a bottle the branding is quietly self assured, minimal, stylish, interesting.
I’m sure that I’ve said before about my love (as a Graphic Designer) of text and typefaces and so Otley’s design has an added geeky thrill for me. 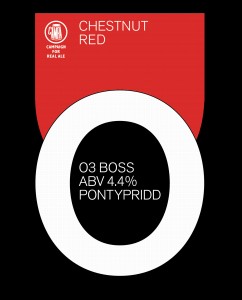 I like the way the website looks.
There are no photographs of the rolling Welsh countryside or working hands holding hops, malt running through fingers.
Instead there’s black and white, a splash of colour on the bottle labels and pump clips, rather reminding me of some super cool rock band’s homepage.
The feeling I get from the way they present themselves is that this is a brewery who want their beer to do the talking, that they’re not overly interested in long and drawn out explanations of themselves or what they do.
And I found it to be true when I did a short interview with them recently.
I was given just enough information to interest me and answer my questions without giving anything away.
I like that too.
This is what happened.

When did the brewery begin?
The Otley Brewing Company began seven years ago in August 2005.

Have you always been brewers or did you do different jobs before this?
We were publicans before we were brewers and in fact we still are publicans as we now have four pubs as well as the brewery.

Where are you brewing and what capacity do you have?
We brew our beers in Pontypridd.
Since our expansion earlier this year we brew fifty to eighty barrels per week but we are still working on a ten barrel plant.

What are your plans for the future?
To keep doing what we are doing and maybe launch an exciting new beer or two!

And here’s what I thought of Otley’s bottled beers.
(Please note that two of these are older reviews included again here for completeness). 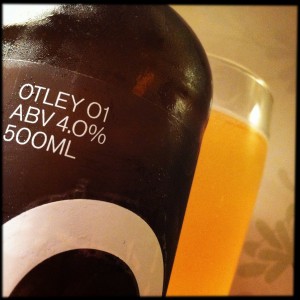 Otley O1 (4%)
Weighing in at 4%, this is a light golden session beer that I could happily spend an entire evening with.
Otley O1 sits in your glass all glowing and light and golden and its smell is straw, apple juice and a gently spiced caramel.
This is a beer that feels good and fresh in your mouth witha  crunchy Rich Tea biscuit giving in to a nicely peppered toffee fudge and a serious straw-like dryness.
This is accentuated by the mown grass bitterness of the hops, sharp with lemon rind and as bitter as a mouthful of bramble leaves which all makes for a finish that’s bright and fresh and superbly crisp and bitter. 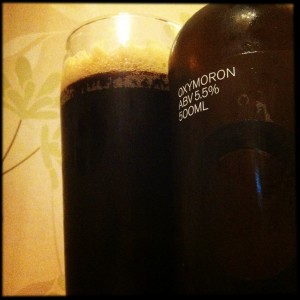 Oxymoron (5.5%)
This is Otley’s Black IPA and it’s like no other BIPA I’ve tasted.
Let’s start at the beginning.
Oxymoron pours coal mine black with a big fat head that slowly relaxes into a comfy ring of fluff.
The aroma is treacle and flowers and wood shavings and chewy cola bottles.
Why this tastes like no other DIPA I’ve tried is that it’s intensely, almost insanely bitter.
But that’s a good thing.
A very good thing.
Oxymoron’s malt is good but it’s quiet.
You get a nice biscuit base but it’s hiding and needs searching out, and there’ a good Daim Bar almond caramel thing too, but this also needs hunting down as it’s wandering around in the wings egging on the hops that come at you with a fiercely sharp, bitter intensity.
Great slashes of lemon rind and grapefruit, kiwi flesh and mandarin juice combine with harshly dry hazelnuts and sapling wood to leave the most exquisitely long über dry bully of a finish.
Super. 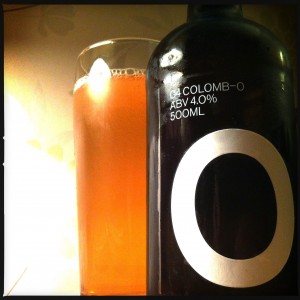 O4 Colomb-O (4%)
Brewed with North American hops, this is a delightfully soft pale ale.
Colomb-O pours a pale amber and smells of mandarins, satsumas, all things orange, and it’s a super fresh smell too.
What I really like about this is that, unlike so many other beers brewed with these supercharged US hops, Otley have created a subtle and easy drinking beer.
So many beers use all this American stuff to create in your face brutal bitterness, and I love them (as you know), but it’s really refreshing to taste these flavours without having to staple your face back on afterwards.
The malts here are honey and caramel and just a little biscuit, and the hops are orange juice, lemon rind and a scattering of coriander and camomile greenery that provides a very nice fresh herbal leafy finish.
The only complaint I can find with this is that my bottle could have done with a little more fizz. 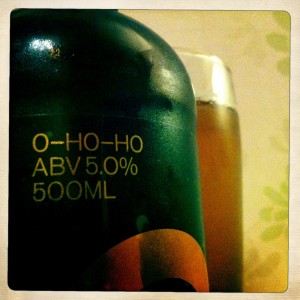 O-Ho-Ho (5%)
This one was a real surprise.
Being Otley’s Christmas beer I was expecting something dark and rich, a stout rather than a golden ale.
I knew it’d been brewed with blueberries as it says so on the label, but I wasn’t expecting a hop heavy, spicy, lightly fruited beer.
And that’s what this is.
O-Ho-Ho is a warm fireside orange that smells of kids’ sweets and timber.
The blueberries don’t really add a fruity flavour so much as they make everything else feel plump and ripe and juicy.
There’s a big fat malt that’s all shortcrust pastry with burned edges and sticky with toffee.
There’s a feint plum, pudding thing going on too but it’s fleeting, quickly being replaced by hot spicy hops that are nettle sting sharp, cola bottle sweet and verge on dandelion and burdock before becoming very earthy, crunchy, crisp and dry.
What a lovely and highly individual Christmas beer this is. 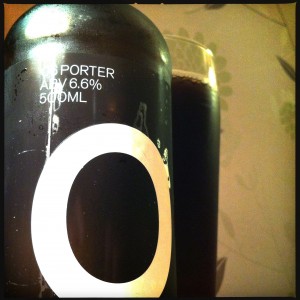 O6 Porter (6.6%)
This is a very sexy Porter.
It’s not a shouting and screaming sexy though.
There’s nothing brash, instead this is a beautifully dressed and gorgeously sensuous, subtle beer.
Otley’s Porter pours a super purple brown and smells of chocolate and prunes, warm and sweet and rich.
As you take a mouthful the chocolate is glorious, mouth coating and unctious, milky and rich with cacao.
This in turn is washed away by raisins, a dash of rum and a big bowl full of stewed red fruit, equally rich, sweet bitter and meaty.
The hops are leafy to the point of mulch, with a super woody crunch and a large vanilla softness that blurs the edges and leaves a finish that’s soft focussed, chocolate coated and splashed with enough single espresso to wake you from your bleary eyed state ready for another sip. 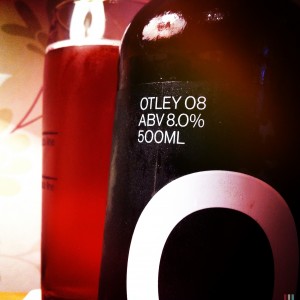 Otley O8 (8%)
This doesn’t taste anything like I expected it to, but it does taste rather brilliant.
O8 is a rich amber beer that holds no head at all.
The smell is really interesting, full of whisky doused orange marmalade with a glassful of homemade lemonade on the side.
Taking a big mouthful throws an immediate curve.
O8 has a distinct earthiness that’s absolutely packed with blue cheese rind and wild mushrooms.
It’s earthy and rich, deep and meaty, and incredibly delicious.
Sweetness comes in the form of a very pleasant toffee coated biscuit, all malty baked crumbs and slowly dripping caramels.
This turns to a darker, blacker treacle and splashes of rum as you move down the glass.
The hops are floral in a springtime new leaf green way, fresh but pithily dry.
But it’s that funghi filled blue cheese that fills the palate and that I find really very delicious. 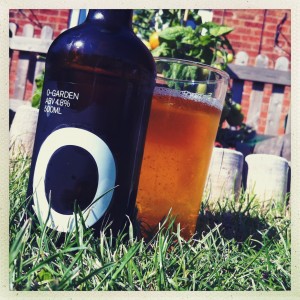 O-Garden (4.8%)
I poured this really badly and as a result I’ve got a bit of a yeast soup going on.
Regardless of that this is an almost jaw-droppingly good beer.
It pours a satsuma orange colour with a light foamy head and the smell is fresh and zippy with citrus and mown lawns.
I was concerned about the addition of coriander, orange peel and cloves but here it’s been done with such a lightness of touch that it lends delightful, gentle tones rather than big bangs of overwhelming flavour.
There’s a good caramel and banana background to this wheat beer and the spiced orange and coriander wash across it as the snappy pith of the hops give a dry bitterness to the finish.
What a super beer this is.