Posted on November 6, 2012 by Simon Williams 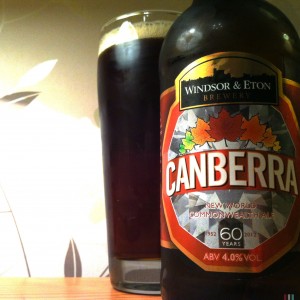 This is the third and final instalment in Windsor & Eton’s trilogy of beers brewed to celebrate the Queen’s Jubilee.
Canberra is named after the plane that flew footage of the Coronation to Canada and has been brewed using New World hops and a splash of maple syrup.
It’s a surprisingly subtle beer, but really rather good to drink.
Canberra pours a delicious conker brown with a light foamy head and smells of peanut brittle and lightly spiced toffee.
The malts here are rounded and comforting, full of digestive biscuit richness with a big glug of salty maple syrup, a little chocolate, some raisins and a slightly buttery fried bacon edge.
The hops aren’t huge, but they’re playfully sharp and big enough to stand up against the malty body.
Grapefruit mixes with lemon rind, soft apple skins, peach and pear juice, and a nice pithy flower arrangement lead you into a finish that’s both dry and sticky with syrup.
What a splendid end to this trio of beers.