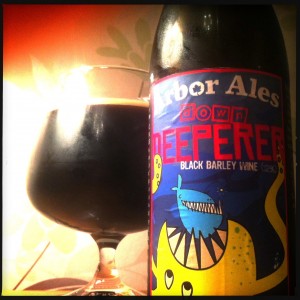 After Arbor Ales made a DIPA called Down Deeper for the CAMRGB #DownDIPA Twitter event and a fair few people said it was more like a Barley Wine they decided that they ought to make an enormous and truly ridiculous Barley Wine.
Down Deeperer is the result.
It’s a Black Barley Wine.
Yes you read that right, Down Deeperer is a Black Barley Wine, and what’s more it’s rather brilliant.
Pouring an India Ink black, the smell is chocolate and rum and plums.
Taking a sip is a breathtaking experience as you’re initially attacked by an enormous malt monster that’s been fashioned from Oreo‘s with gnashing chocolate teeth, swimming in a raisin infested brandy sea, all warm and spiky with black pepper and chili seeds.
The hops are skull splittingly dry and crunchy and rather like hiding in a pile of autumn leaves in the hope your friends don’t find you.
At least it gives you somewhere to go out of the gaze of the Oreo beast.
There’s some fresh lemon rind zing and a bagful of sherbet waiting for you when you get back out, and the monster turns out to be friendly as he hands you a bag of penny sweets and takes you by the hand to lead you into a finish that’s equally thick with bitter chocolate and tart with black coffee.
There’s one more trick up his sleeve though as he wanders off into the distance dragging your tongue behind him.

OK, I must confess an interest as this is a beer I designed the label for, but I’m pretty sure I’d have written the same review regardless.
Honest.

2 Responses to Arbor Ales Down Deeperer (12%)