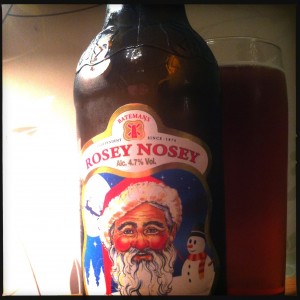 OK, I’m really unsure what to say about this beer as I find it singularly uninteresting.
And what’s more there is little here that even hints at Christmas other than the rather feeble illustration on the label and the silly name.
Flavour wise there’s a big and rather harsh digestive biscuit and a soft dark caramel, and then there’s a decent bitter hop that tingles and leaves a nice dry woody finish.
But tell me this.
Isn’t what I’ve just described just a regular run of the mill decent but uninspiring Bitter?
Rosey Nosey isn’t a bad beer by any means, but it’s nothing to shout about at Christmas.
In fact if I was a more cynical man I’d suggest that this may well be one of Bateman’s regular beers wrapped up in a Festive costume.