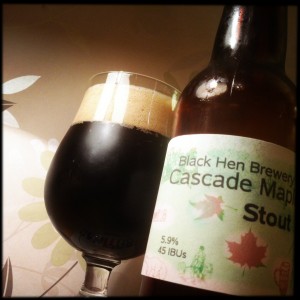 A bottle of this was opened at the CAMRGB Christmas do and though it was good, according to its brewer, it wasn’t quite ready.
He was of course right and what a difference a week makes.
Now, on Christmas Eve, Cascade Maple Stout pours a gorgeous purple brown with a very cosy cappuccino head and smells rich and full of chocolate coated prunes and rum.
After being able to only have a mouthful a week or so ago I felt spoiled by a whole bottle and so I took a big swig.
And what a swig!
This is a bitter chocolate driven beer but it’s beautifully balanced by a rather good woody maple syrup leafy sweetness.
There’s a some nice treacle toffee too and it’s burned at the edges giving a tamarind tartness.
The hops are dry brown crunchy leaf litter, fresh and crisp like a walk through the countryside as the first frosts bite.
The finish is long and dry but equally sticky with syrupy goodness.
Another winner from Ferg.