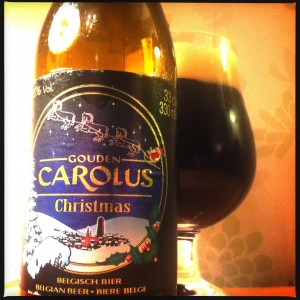 This is, put simply, a big fat blob of a Christmas beer.
It pours a deeply rich brown with a foamy cream head and smells of prunes and rum and aniseed.
But the thing is that this big fat blob of a beer is just a little too big, a little too fat, and a little too blobby.
It’s so big it becomes flaccid and just too weighty.
There are some very nice flavours, from a dry, crumbly biscuit base to a warm and rich rum and raisin, but there’san overly sugary thickness that clings to your teeth and makes you want to reach for your toothbrush.
I wanted so much to like this, in fact I was hoping I’d love it, but instead I feel the need for a big glass of water to help wash away the overly cloying, sticky, liquorice rich mess.
I imagine there’ll be lots of people who don’t agree.
That’s fine.
This is only my opinion, and in my opinion this is big and fat and blobby.