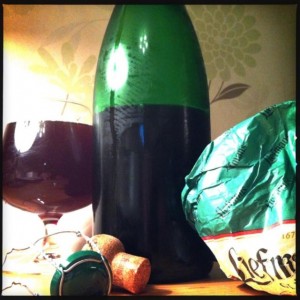 In the past I’ve dismissed fruit beers outright, saying they’re overly sweet and icky and that I’ll never like them.
But as with Lambics (and dare I say it, many other things) I was wrong.
This bottle came as part of my latest beer club installment from The Beer Hawk and though I wouldn’t drink this often, Leifmans Glühkriek is a million miles away from the other fruit beers I’ve tried, or my tastes are continuing to change, and it’s rather enjoyable.
For a start it’s not massively sugary, tempered as it is by spices and a good Lambic bitterness.
The cherries are fleshy and fresh and there’s some delightful and rather Christmassy action in the shape of cinnamon and cloves, as well as snappy black pepper.
An apple juice astringency cuts across this, and along with some lemon peel and fresh herbal leaves, you get a good bitter dry finish that clears away the sweet fruitiness and readies you for your next mouthful.
As I worked my way down the glass the aroma started to become a little overpowering and medicinal and by the end I was glad it was over, but I’ll certainly no longer be dismissing fruit beers out of hand.
My oh my how things change.