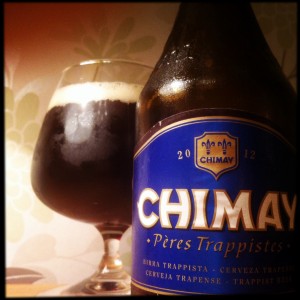 This is another of those beers that loads of you will already know but for one reason or another I’ve not written about before, but as it’s just turned up in this month’s Beer Club box I don’t have an excuse not to.
So, what can I say?
Chimay Blue Cap was originally brewed as a Christmas beer and does pretty much everything you’d want from Trappist brew.
It’s a dark purple and rather feisty beer that smells of plums, liquorice and rum, with the flavours following suit.
A rather nice baked biscuit gives way to sticky caramel, brandy, stewed plums and prunes and a big woody liquorice root.
It’s a little difficult to discern any hop presence save for a light citrus wash and a sharp green dry finish.
The dangerous thing about this beer is that it doesn’t feel anywhere near its 9% ABV and as a result you could probably get in a mess rather too easily.
But what a way to go.