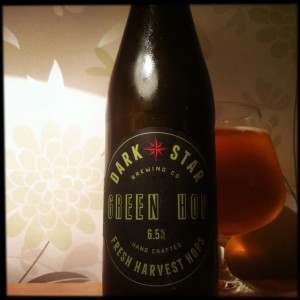 It’s the addition of the fresh hops that make this beer for me.
I’m not a big fan of Simcoe, the main hop in here, but the unnamed fresh green hops make this a rather lovely beer.
Let’s start at the beginning
Green Hop smells sweet and fresh and, well, green, and has a silage tinge and a little bit of over ripe apple.
There’s a very nice shortbread biscuit brushed with sugar and sticky with caramel that lies at the bottom of this beer and fills it out, makes it soft and sensual.
But this is a beer about hops, and these are big hops.
There’s a snappy and sharp lemon and lime juice that’s almost strong enough to make your eyes water.
There’s also a tingling sherbet and fizzbomb sting, but mainly there’s an über green leafy and slightly farmyardy roundness that’s juicy while remaining tongue curlingly dry and pithy and leaves a fin