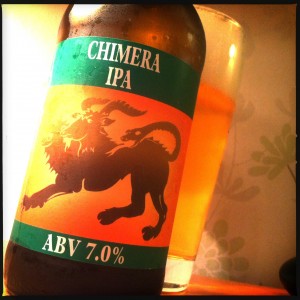 For some people Chimera is a bit of a classic and I can understand why it once may have been and I think it’s OK, but it has something about it I find a little fusty.
On opening the bottle the beer took a bit of taming as it gushed like an angry cloud over the top and down my arms.
Chimera is a very light straw colour and has a yeast tinged, slightly metallic, fruity aroma.
There’s a subtle digestive biscuit in the malts, along with a very nice sweet dark toffee, some sage and black pepper and a spoonful of honey.
The hops are nice and lively, picking at you with dandelion leaf bitterness, hazel and the sting of nettles that should be lovely but is a little spoiled by a bready, almost airy yeast that floats around all over this and creates a soft dough finish that’s nowhere near as sharp as it should be.
And dare I say it for fear of being Trolled into next century, the bottle has that label on it.
That label that more and more I’ve come to expect from beers that aren’t perhaps quite as exciting as they pronounce themselves to be and all have a shared something going on in the background.
How come so many other breweries can make bottle conditioned beer that feel and taste full and fresh and alive when so many taste a little stale and homogeneous?
Sadly, that’s Chimera for me.
Now bring on the Trolls.