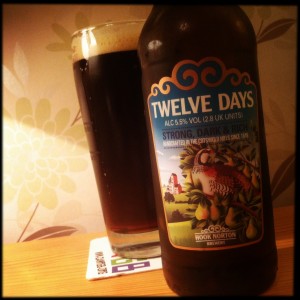 Beautiful label.
There I’ve said it.
I’m not a big fan of Hook Norton as I find there’s an underlying flavour to most of their beers that I can’t quite put my finger on but that I find slightly unpleasant.
Twelve Days pours a nice bitter chocolate brown and smells of said chocolate and the merest hint of spice.
There’s chocolate in the flavour too.
A lot.
It’s big and bitter and rather overwhelming.
It certainly doesn’t leave room for much else.
You get a little rum and raisin and just a dab of honey.
I presume there are hops but they too have been beaten into submission by this chocolate bully.
All in all this is pretty one dimensional and wholly unexceptional.
Its only saving grace is that it doesn’t seem to have that background hum that usually puts me off so many of Hook Norton’s other beers, but that might just be because of the chocolate