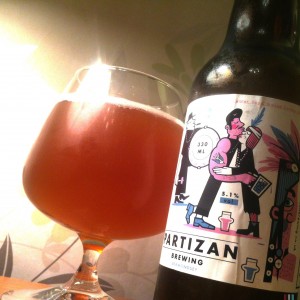 I was told that I needed to try some beers from Partizan and this is the first of the two that I found and it’s really rather good.
Sitting in my glass a fizzing orange ball of fire, the smell is super fresh and zingy with lots of mango, satsuma and lime.
There’s a decent malt to this Pale Ale if a little soft, some sweet caramel and just a trace of biscuit.
But that’s OK as this is all about hops.
Big sharp spiky hops that poke at you with hazel twigs and slap you with stinging nettles while rubbing lemon juice into your eyes and feeding you orange peel and grapefruit zest.
The result being a finish that’s supercharged with astringent bitter citrus.
It’s clean, tongue witheringly dry and really ace.
Someone mentioned The Kernel to me in the same breath as Partizan and, though this hasn’t quite got the same depth of character, it’s certainly heading in the right direction.
I’m very impressed.