Posted on December 4, 2012 by Simon Williams 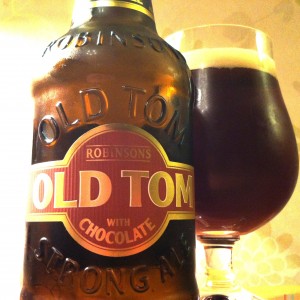 I was quite expecting not to like this beer.
It happens all the time with the original Old Tom too.
I buy one and then it sits there for ages while I don’t drink it as I think it’s not so good and then when I finally open it I like it very much.
Isn’t that ridiculous?
More recently it may be something to do with the fact that Robinson’s made a beer for Elbow, which should be enough to put anybody off.
Anyhow, Old Tom With Chocolate isn’t quite the original as it’s dropped a couple of ABV, but ti still smells big and round, full of rum and raisin and chocolate.
The malts are all about digestive biscuits and toffee, and there’s boozy red fruits, raisins and sultanas and some very nice spiky spices floating around.
The hops are mown lawns and hazel leaves that give a nice pithy finish.
Bubbling away under all this a soft milk chocolate wanders about, gets comfortable on your tongue and feels for all the world like you’ve eaten a rather nice block of chocolate.
Very good indeed.