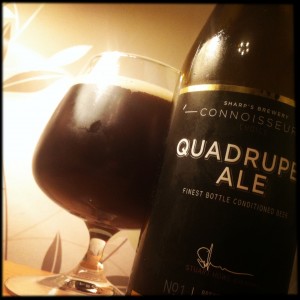 Part of Sharp’s Connoisseurs Choice Series, Quadrupel Ale, albeit it spelled incorrectly, is really rather good.
It’s a mahogany red beer with an aroma that’s thick with plums and rum.
The malts are supercharged bran rich digestives with thick treacle, damsons and booze.
But there’s another layer here that I’m guessing is to do with the combination of different yeast strains.
You see there’s a lightly sour background, a little like a softer Duchesse De Bourgogne, all red cherry rich and verging on the sour.
It’s not in your face but it’s there and it’s deep and I like it very much indeed.
The hops are crisp, very dry and steeped in nettle tea, but they’re pleasingly floral too, with a soft lavender background that leaves a finish that’s round and fruity, dry and sticky.
Very interesting, very nice.