So Here It Is, Merry Twissmas: The CAMRGB Christmas Party

It’s early Sunday afternoon and I’m waiting for lunch.
There’s a beer cooling in the fridge and the murmur of children and television downstairs.
Outside the sun is shining and it’s cold and crisp.
Inside I’m happy and smiling and more than a little mesmerised by what exactly happened yesterday.
You see, for those of you who don’t know, yesterday was CAMRGB’s Christmas Party in North London and it attracted a far larger crowd of people than any of us could have imagined.
Let’s start at the beginning.
I caught a train that got me into St. Pancras at just after two o’clock and took a leisurely two mile walk up to The Southampton Arms where everyone was to meet at about four.
There was a reason I was getting there a little early.
You see I’d arranged with the ever so suave Byron of Brewers & Union to taste test their newest beer.
We both entered the pub at exactly the same time, exchanged hellos, got a round in (I had a rather good Howling Hops Pale Ale) and had a good chat about the story behind how Brewers & Union work and where they’ve got to as a brewery.
It’s a very interesting story, but it’s not a story for here, so I’ll tell you some other time.
Shortly after we arrived we were joined by Matt (@totalcurtis) of Total Ales blog whose idea it had been for this Twissup in the first place, and after introductions we started tasting Byron’s beers.
The first few I’d tried before (and reviewed elsewhere in this blog), and as we worked through them other CAMRGB people started to drift in. 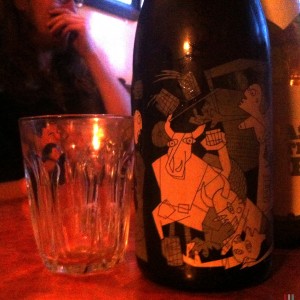 One of the highlights of the tasting for me was an unfiltered lager called Beast Of The Deep which was bursting with flavour and had a good warming alcohol hit.
But the thing we were really there for, the beer I’d been hoping we’d be brought was saved until last.
Touro Tripel is a 10% Belgian Triple presented in the most beautifully designed cork stoppered 750ml bottle, it’s not available in the UK at all at the moment and so we were very lucky to have been offered a bottle.
We shared it with as many people as we could and at least a dozen tried it and agreed that it’s a very special beer indeed.
By this point almost every inch of The Southampton Arms was taken over by CAMRGB people and it was more than a little disorienting.
Wherever I turned there were smiling people sharing beer and saying hello to each other and simply having a really good time. 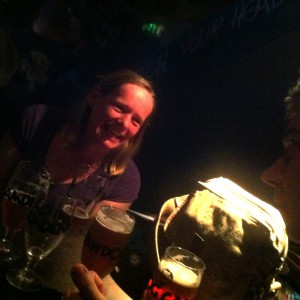 Becky of Art Brew & Matt of Total Ales share a drink and a giggle.

We left at around 5.30 and took the ten minute walk down to BrewDog Camden who were amazing hosts.
They’d cordoned off the entire downstairs bar with a big sign welcoming The CAMRGB TWISSUP and we all got settled on the big comfy sofas with beers (my first was a rather fine 5AM Saint from keg) to continue our mingling and fun.
All around me new friendships were being made, all around me people were laughing and joking, all around me people were getting ever so slightly drunk.
We were joined by Becky and John of Art Brew who’d travelled over especially to hang out with us, and they were quickly taken into the fold and spent the rest of the evening laughing heartily at and with us all.
They even managed to get their brewery name written on the BrewDog walls. 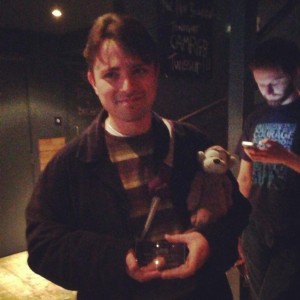 Nik and The Kernel Monkey accept their award.
(Photo courtesy of Justin)

Just after six Nik arrived.
He works with The Kernel and had turned up to receive the brewery’s Beer Of The Year award.
He was a little embarrassed at the enormous reception and I think, like myself, a little overwhelmed with just how many people were there.
Photographs were taken, the award was presented, and everyone got on with getting on.
Somewhere along the line I drank the Simcoe overload that is BrewDog’s Hoppy Xmas (7.2%) and decided that I may not be a big fan of that particular hop, before downing a pint of 5AM Saint with my very old friend Liam (@drlamb23) who I’d not seen since 2002 and who had travelled down from Lincoln for the party.
Then it was time for my little surprise.
You see I’d been keeping something for a special occasion.
And what occasion could have been better. 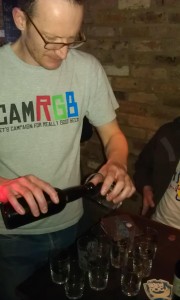 I’d brought with me my last bottle of Greene King‘s 76 year old Coronation Beer (12% or thereabouts).
After it was uncorked by BrewDog’s area manager I poured several little taster glasses and we handed them around.
I think at some point it might have been agreed, through hearty laughter, that GK might improve all their beers by letting them mature for three quarters of a century.
I’m really pleased I decided to take the beer along though, as it was a genuine pleasure seeing people excited by trying something so out of the ordinary.
We opened a couple of home brewed beers too, one by Fergus and Andy‘s Black Hen Brewery (@fergusmciver and @andyandybee123), which was a rather subtle Maple Stout, and a rather fine IPA by Pete (@petedrinks).
I’d love to talk more about them but unfortunately other than a swift swig I didn’t get a chance to really taste them.
In fact I didn’t really get a chance to drink much at all as I found myself in a weird sort of ongoing conversation that began at around 4pm and was still going when I left for home at ten.
This conversation, centered around CAMRGB, beer, friendship, moved between different people and the faces changed but the conversation just flowed and flowed. In amongst it I finally got to have a brief chat with Claire of MoggyTech (@krider2010) so that I could thank her for building the CAMRGB App.
It was a bit odd but a lot wonderful and included meeting around two dozen people who I’ve known online for over a year but not until last night met face to face.
I must quickly thank Steve from Ale Talk (@aletalk) for showing up, it was really splendid to have him along and after all, without his help right at the beginning of CAMRGB none of this would be happening.
After I’d been treated to my first taste of BrewDog’s Tactical Nuclear Penguin (38%) we rounded everyone up at about 8.30 and headed for The Euston Tap, which was to be our last stop and the setting for our Secret Santa.
I, along with Simon and Rachel (@Sipperana and @DrElfy respectively) and Pete Drinks, opted to walk the mile from Camden to the Tap.
I’m really pleased that we did too as it gave us chance for a good natter and some fresh air.
Furthermore we arrived before most of the people who took the tube. 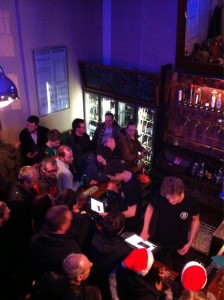 CAMRGB take over The Euston Tap.
(Photo courtesy of Rachel)

The Euston Tap was packed solid and it was difficult to get to the bar.
However I was rescued by the ever superb Justin (@1970sBOY) who bought me what was to be my favourite beer of the whole day.
Double Crooked Tree (13.6%) by The Dark Horse Brewing Company was an explosion of Belgian yeast tinged triple honeyed hop magic and I made it last for as long as I could.
We all gathered outside and acted a bit daft as we stood in a circle with our Secret Santa presents passing them between ourselves until, at a randomly chosen moment (which I think may have been when we all felt a bit silly), we all stopped.
Whatever we were left holding was our gift.
I have to say people had gone to some trouble to buy things that were special and I was more than happy with my Victory Brewery Saison (7.5%) in its lovely 750ml bottle.
And so it was the end of the day, my train was only twenty minutes from leaving and I had to say goodbye. 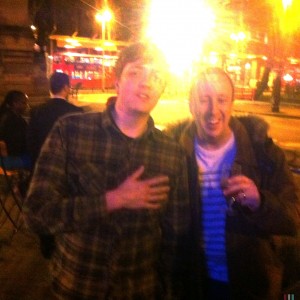 There were lots of hugs and lots of handshakes, lots of smiles and words of thanks.
Most importantly there were lots of new friends made and the sudden realisation between us all that this little gang, club, movement, organisation, call it what you will that we were all now part of has finally become something really tangible and really rather powerful and special.
The hour long train ride home felt twice as long but it gave me time to reflect, and reflect I did.
But that’s for my CAMRGB End Of Year Report in the next few days.
In closing I’d like to thank The Southampton Arms, BrewDog Camden and The Euston Tap for being such fabulous and accommodating hosts, Byron for bringing such brilliant beer to taste, John and Becky for being such good fun, Nik for accepting the Beer Of The Year Award on behalf of Evin and The Kernel (who was unable to make it due to family illness. I hope everyone’s better soon dude) and most of all I want to thank every single one of the people that I spent yesterday with.
I can’t mention everyone’s names, but what I can say is you’re all brilliant.
Cheers.

2 Responses to So Here It Is, Merry Twissmas: The CAMRGB Christmas Party