Posted on December 8, 2012 by Simon Williams 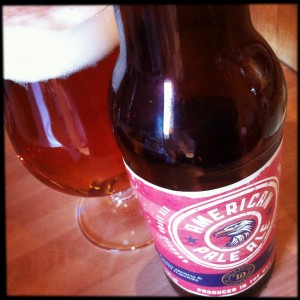 Yet another disappointment from Sainsbury’s Taste The Difference range, though after trying the IPA the other day perhaps I shouldn’t be surprised.
As with said IPA the colour is very good, glowing all warm and copper in my glass, but there’s no discernible aroma save for the mildest malty caramel.
Taking a swig there’s some toffee to have a go at and a digestive biscuit base, but there’s none of the floral, citrus, spicy flavours hinted at on the label.
No, actually that’s not quite true.
There are some, but they’re so teeny tiny that they’re barely worth mentioning.
And again, as with the IPA, there’s a rather unpleasant chemical tinged aftertaste that I really don’t like.
To sum up, I don’t know why anyone would buy this more than once when Sainsbury’s have Sierra Nevada’s superb Pale Ale on the shelf alongside this and at about the same price.
I suppose it might be a way in for someone who is just starting out on their beer journey, buying this and then the Sierra Nevada next time, but I’d be surprised if once they’d switched they ever went back.