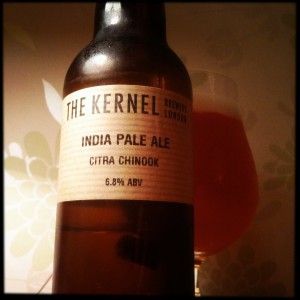 Here’s yet another example, if one were needed, of why The Kernel are so loved by most everyone who tries their beer.
I’m not Citra’s biggest fan but tempered with Chinook it’s a whole different thing.
This beer’s aroma leapt out at me as I opened the bottle, a huge hit of fresh lemon, pear, sherbet and sweeties.
Citra Chinook has a chewy toffee malt to anchor it, giving it heart and body with it shortcake biscuit, peach and pear juice.
As for the hops the Citra tries really hard to be eye wateringly sharp and bitter, but the Chinook works hard to put a nice resinouswood bark and pine nut richness in the mix.
There’s a load of mandarin flesh, a super blast of fizzy penny sweets, some foam shrimp and a handful of fresh herbs and hedgerow undergrowth.
And then there’s a finish that goes on and on, bitter as gall, dry as a bone and absolutely wonderful.

One Response to The Kernel India Pale Ale Citra Chinook (6.8%)