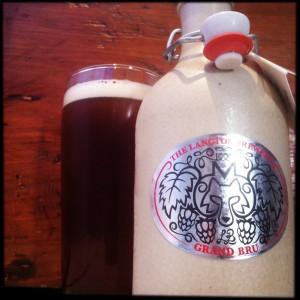 We should support our local breweries, right?
Even if we don’t like the beer that they make?
You see The Langtons is my local brewery, located only about two or three miles away from me but I’ve yet to find one of their beers that I like.
Until now.
Made to celebrate their thousandth brew, Grand Bru is a rich and fruity golden ale.
The aroma is apples and acorns, straw and pears and its malts are biscuit based and rich with toffee, figs and burned sugar.
There’s a rather nice and very English hopping going on here too.
It’s all brambes and hedgerows, bitter bark and resinous pine, blackcurrant leaves and burdock root.
Earthy and airy and rather big and bold, congratulations to The Langtons on their landmark brew.
I just wish they’d make more beers with this much character.