Posted on December 9, 2012 by Simon Williams 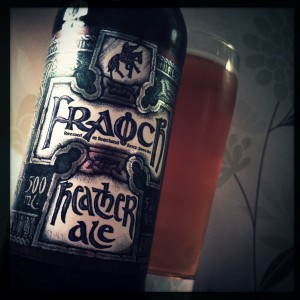 Fraoch is Williams Bros’ Heather Ale and it’s based on a 16th Century recipe, and what’s more I rather like it.
It smells of honey and grass and earth, and glows a lovely orange in the glass.
This is a very sweet drink and as such I probably wouldn’t have more than one in a evening, but that said it’s definitely worth having one.
There’s a really nice body to this ale that’s infused with sticky honey and made round, deep, and earthy by a good thick caramel.
The heather brings a rather spiky, spicy and slightly salty green and floral bitterness and a big dandelion pithiness pops up right at the end.
There’s a lots of herbal flavours in here too, and just a touch of wild garlic that reminds me of the fresh smells of wandering next to a stream in the woods at the back of my family’s home.
For me the finish is just a little too sticky and gooey, but then I’m a hop head who loves to have that dryness that turns your face inside out.
But that’s a very slight moan about what is a rather lovely and interesting ale.