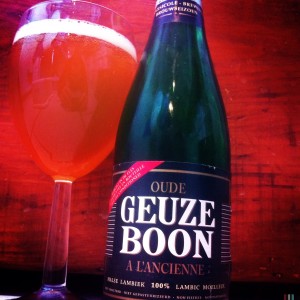 If I didn’t know Fantomê already I’d say I’ve just found my favourite Lambic beer.
Geuze Boon pours a super cloudy amber and has an earthy farmyard, blue cheese and apple vinegar smell that is so astringent it gets in your eyes as much as up your nose.
On your tongue there’s lemon juice and toasted brioche, sharp green leafy brambles, soft blue Roquefort and a few flakes of hard Parmigiano Reggiano, and that’s just in the first mouthful.
This is a beer that grows and evolves as you drink, building flavours as you move down the glass.
It’s also a beer that doesn’t make it easy to talk about what its malts and hops are doing individually, this is a beer to talk about as a whole.
The sourness builds to the point of puckering your lips and scraping your teeth while underneath sage and pear juice, unripe peaches and green grapes play with celery salt and gooseberries on a bed of damp straw.
I could go on and on but I won’t, this is a classic beer after all and those who have been drinking and loving Lambics for a long time will probably be wondering why I’m making such a fuss, but I’ve just fallen in love with its blistering bite.