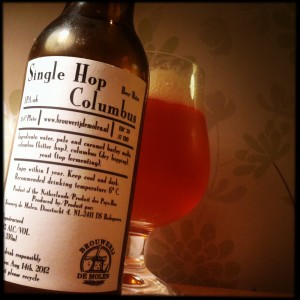 According to the label this is IPA-ish.
They’re not wrong and it makes me smile that De Molen have the sense of humour to print that on their beer.
Single Hop Columbus opened with a hiss and poured with a feisty cloud of head and the smell of mandarin skins and just a hint of lavender.
This lovely orange beer doesn’t so much build up to a crescendo as just scream at you from the moment it hits your tongue.
The Columbus hops give a fiery spiced orange juice, sherbet fizz, some pineapple chunks and lychee dryness with a bitterness that is scorchingly citrus and not unlike chewing your way through mandarin and lemon skins.
Occasionally a soft caramel and a few biscuit crumbs come up for air, but they’re quickly scared off by this enormous hop beast.
This is no beer for the feint hearted.
I for one ove it to pieces.