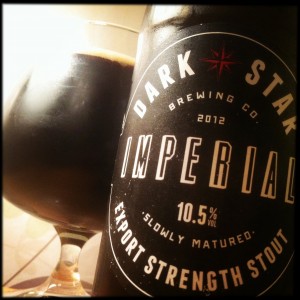 Dark Star’s Imperial Stout is, to my tastebuds, unlike most other beers of its style.
Don’t get me wrong, it has all the key features you’d expect.
For a start it’s full of rum and brandy filled plums and damsons and it has a massively comforting bran rich biscuit crumb base.
It’s also got liquorice and treacle, coffee and dark bitter chocolate along with delightfully dry, crunchy crisp hops that are equally lemon sharp and red leaf mulch warm and damp.
But whether purposefully or not, Dark Star have added something else.
There’s a splash of Coca Cola fizz and a glug of cheek tightening Lambic-Lite sourness.
It’s not enough to put you off if you’re not a sour beer fan, but it has enough presence to be a distinctly important part of this delicious Imperial Stout.
It lurks around just under the surface a creates a lovely bitter fruit hum that lifts all the other flavours, makes them more pronounced in their burned sugar bitter sweetness and I like it very much.
The finish is a chocolate coating to your tongue that’s steeped in espresso and lightly spiced red fruit.
What a great and rather individual bottle of stout this is.