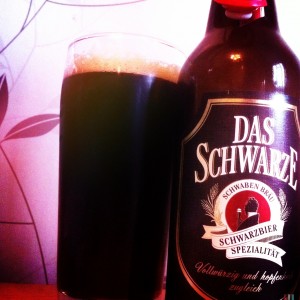 Another Aldi find and another beer that’s pretty good for its price tag.
Das Schwarze pours a deep  treacle brown and smells malty, chocolatey and a little bit fruity.
As you drink you initially get a lot of dark chocolate but it doesn’t hang around too long and is replaced by a rather nice burned biscuit and raisin richness.
The hops taste of nothing more than the piles of autumn leaves you used to kick on your way home from school.
They’re red and crunchy and tinged with a damp mulch that makes for a finish that’s perhaps a little too sticky, but as I said, for this price you could do much worse.