A Gang Of Four From Shepherd Neame 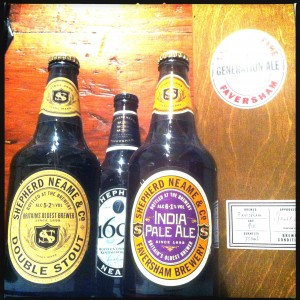 During my visit to Shepherd Neame the other day I was very generously gifted a bottle each of their new beers to drink and to review.
I’ve seen reviews of a couple of them, most notably the India Pale Ale which has had a mixed bag of write ups. I for one really like the look of the new beers, I think the labels that echo some of the very old bottle labels I saw on my visit to the brewery are very nice indeed as they capture something essential to the brand without being too shouty.
They also speak volumes about how rebranding can be done with style to capture new audiences instead of just slinging the words “Craft” or “Hand Crafted” across everything.
Furthermore they sit nicely on brown bottles which makes me very happy, though I’m told we should really be calling them amber.
Anyhow, enough about the look, though I must quickly mention how lovely the Generation Ale looks in its wooden presentation box and sealed tissue wrapper, what do the beers taste like? 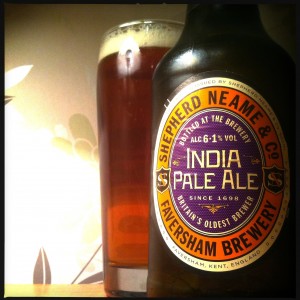 India Pale Ale (6.1%)
I don’t care what anybody else thinks, this is a terrific IPA with plenty of character. Pouring a clear golden amber with a decent foamy head, the smell is pepper, cloves and a hint of nutmeg along with light caramel in the background.
My first sip was, in my humble opinion, what I imagine stepping back in time to be like.
This is an IPA unlike most others we know and love and I think that’s because we’ve grown accustomed to the modern American style über hoppy, grapefruit blast that IPA has become.
Maybe it’s just the Fuggles talking, but there’s something about this beer that is delicious and more-ish and strangely comforting while still providing the stuff we ask for in a good IPA. The malts are sticky rich toffee, caramelised to give some burned bitterness and delivered on a lightly baked digestive biscuit.
The hops are big and bold but rather than being citrus and astringent they’re all bitter English hedgerow, hazelnuts, acorns, oak leaves and a little pine resin all glued together with runny honey that leads you into a stinging nettle bitter dry finish. 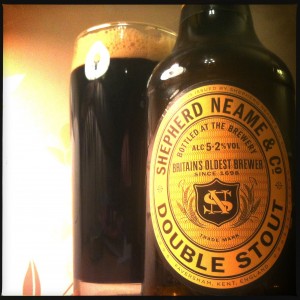 Double Stout (5.2%)
Pouring a deep, dark chocolate brown with a thick foamy cappuccino head, this is a really decent stout.
The smell is bitter chocolate, coffee and, interestingly, a slightly smoky stewed red fruit.
In fact there’s something of a Rauchbier hiding away right in the background of this beer, a light smokiness pervades the whole beer.
The malts are the usual biscuit and rum and raisin, but it’s tempered by a mist of smoky wood along with a hefty plum and prune compote and some singed, toasty pastry.
The hops provide leaf litter and mulch, slightly damp, pricked with spices but still crunchy with autumnal syrupy sweetness that leaves a finish both sticky and viscous and crisp and brittle.
Like holding a sparkler and watching a bonfire, this beer really reminds me of autumn. 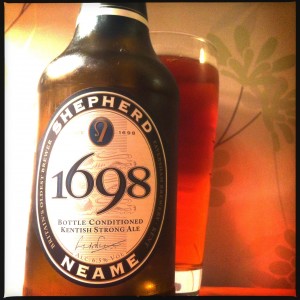 1698 (6.5%)
This used to be my favourite Shepherd Neame beer but now after the new IPA and Double Stout, things have changed.
Not a bad beer by any means, it simply doesn’t have the depth of the newer brews.
1698 is a red fruit rich beer with a well baked flaky pastry base, plums and raisins, a hint of liquorice  and a little whisky heat in the background.
The hops are super light, only just brushing the surface with elderflower and bracken, a little nettle tea and just a touch of lemongrass.
Decent, but not a patch on the new beers. 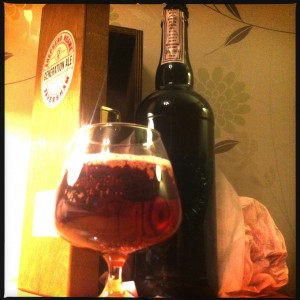 Generation Ale (9%) Brewed with five different malts and five different hops to celebrate the five generations of the Neame family, this is a beautifully packaged beer. It comes in a wooden case inside which, wrapped in delicate tissue paper, is a specially created 750ml bottle.
So it looks terrific, but how does it taste?
Generation Ale is billed as a strong English Ale but for me it’s not too far short of things I look for in a barley wine.
Pouring the colour of a really good sherry with only a hint of a head, the aroma is boozy stewed red fruit, a little rye bread, vanilla and rum.
There’s a good single malt earthy whisky warmth that heats your chest and settles comfortingly in your belly as you chew on digestive biscuits, toffee apples sprinkled with black pepper and stewed peaches.
The hops are crunchy leaf litter, orange and red, earthy and crisp.
Lots more English woodland flavours dance around, birch bark and hazelnuts, nettles and blackberry leaves.
All this builds to a finish that’s equally rich and creamy and sharp with a brittle dryness.