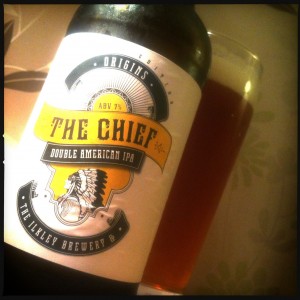 One of only three hundred bottles, this is a limited edition hand bottled beer and what’s more it’s a brilliant take on a Double American IPA.
I don’t know where I’ve been but in all honesty I didn’t know Ilkley were doing this limited range until it appeared in my mixed case from Beer Hawk.
The Chief pours a sexy amber with a good fluffy head and smells of wood resin, spiced citrus fruit and, ever so slightly, damp farmyard straw.
It’s an odd thing but that almost-silage in the aroma carries into the flavours and it’s really tasty, adding a farmhouse ale edge to this American yeast driven IPA.
The malts are thick with burned sugar and runny honey served on a slab of shortcake varnished with red wood resin that goes as hard and crunchy as the outer shell of a toffee apple.
There’s a whole load of woody flavours too and, for want of sounding like Jilly Goolden, it tastes of Balsa wood and walnuts.
The hops are scorchingly dry and bitter, heaped with green and unripe grapefruit and lemon pips, a splash of apple juice is the only thing that softens The Chief up, but it’s just enough and it adds a succulent layer to the finish that’s long and dry and bitterly sharp.
Lovely.