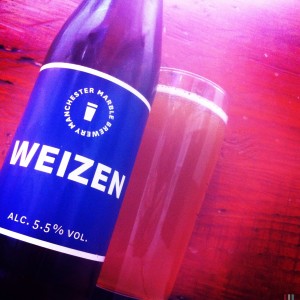 Blimey there’s a strong clove presence in this beer.
It came at me as I opened the bottle and sits right at the heart of this cloudy sunshine yellow beer.
Swimming around the smell of cloves there’s caramelised bananas, black pepper and apricots.
And all these aromas follow through into the flavour.
A big fat chewy toffee rides a slice of baguette and carries its medicinal clove weaponry, slashing at you with bramble, all spiky and sharp.
But there’s a sourness here too and it borders on beer gone bad.
I continued drinking hoping that perhaps it was meant to be there, but as it built and began to beat everything else including the enormous cloves into submission, it started to take on an acidic bitterness not unlike cider vinegar.
Could this be another badly conditioned Marble bottle?
I seem to keep getting them and it’s a real shame.

One Response to Marble Brewery Weizen (5.5%)