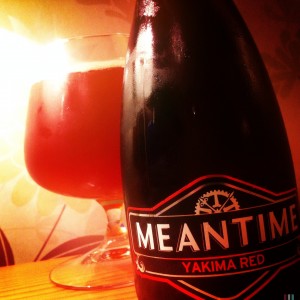 Meantime’s Yakima Red has been around a little while on draught but this is the first time I’ve seen it bottled.
Perhaps I’ve been looking in the wrong direction.
But I’ve found it now, and I’m pleased that I have.
Yakima Red pours a very nice deep amber with a string of head and a very light smell of tropical fruits and pine resin.
Truth be told the aroma is just a wisp, only just there, and in that second before taking a swig I thought, “Oh, here we go. Flavourless beer coming up.”
I was soon corrected.
The beer begins with a toffee heavy digestive biscuit malt that pops with cracked black peppercorns and spiky shards of peanut brittle.
The malts build as you move down the glass, becoming bigger and rounder.
I was expecting the hopping to be an enormous citrus kick in the face, but instead it’s all rather relaxed with the hops having a good fruitiness that’s more fried pears and apricots than burning grapefruit tang.
Over the sugar burned juiciness you get some crunchy dry leaves and resinous woodiness and just a twist of lemon juice to cut the sweetness, leaving a finish that’s dry and lip smacking.
With Yakima Red, Meantime have brewed a super little beer.
I’m glad I’m finally looking in the right direction.