Snow was falling heavily on Monday morning as I started packing and wondering what I should expect from my trip.
I had been invited down to Shepherd Neame to take a look around and brew on their Pilot Kit, a four barrel micro Brewery set up within the main brewhouse.
I kept checking the weather reports and getting more and more anxious about how long this journey was going to take, and in the end decided to leave a couple of hours early to give me more time should I need it.
That was a bad move.
Unbeknownst to me until I reached Market Harborough Station my tickets were only valid on the specific booked trains and so I wandered around in the now quite thick snow feeling grumpy and getting cold and looking for somewhere to grab a cup of coffee.
Having moaned my way quietly through a hot drink I headed back to the station in time for my train and to my surprise it arrived on time. 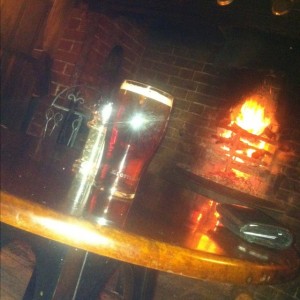 A pint of beer while I wait for dinner.

We travelled south through blizzard conditions, the countryside a grey white fog until the M25 where all the weather miraculously stopped and my connection into deepest Kent ran smoothly too, getting me into Faversham at just before 5pm.
I was booked into The Sun, one of Shepherd Neame’s pubs in the area, it’s an old building with lots of exposed wood, a beautiful open fire, comfortable rooms and friendly staff.
I grabbed a pint of Late Red (4.5%), snagged a comfy seat by the fire and ordered the steak.
It was an odd mix, Beef Bourguignon with slices of Flat Iron Steak on top, chips and vegetables on the side, it tasted very good.
I was met first thing on Tuesday morning by John Humphreys who is responsible for the brewery’s Media Relations and we had a quick chat over breakfast.
I was immediately struck by his openness to answer whatever questions I asked, which was in stark contrast to other larger breweries who have either turned the subject to suit themselves or baulked altogether at answering. 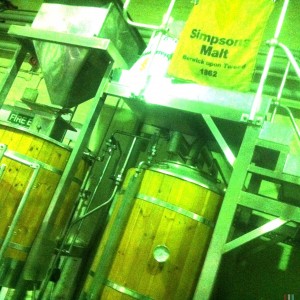 My first question was about clear glass bottles and I was told that many of the Shepherd Neame beers are moving into amber (brown to you and me) glass, though one or two, Spitfire in particular, will remain in clear.
Breakfast over we walked the hundred yards to the brewery and I was introduced to Stewart Main, Master Brewer, and his assistant Peter.
Stewart is an open, warm and friendly man, keen to pass on his knowledge about and passion for brewing, and keen too to get me earning my keep.
We were to brew a Triple Oatmeal Stout at around 4.2% ABV and my first job was to climb to the top of the kit and get all the grain into the mash tun.
There was a lot of it.
Mashing in done and with an hour of cooking to come, John took me on a tour of the main brewery starting at reception.
There’s a reason I mention reception.
You see Shepherd Neame is a family business, but it’s not simply a family owned business, the receptionist for example has been at the company for over forty years.
What’s more members of her family work there too. 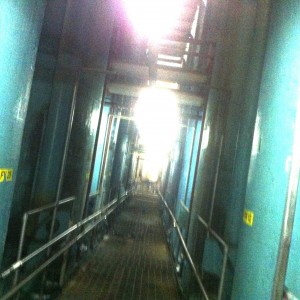 Welcome to The Cathedral Of Beer.

Throughout the company there are employees who are third generation members of staff, their fathers were draymen or carters, their mums were typists and secretaries.
It’s not the kind of thing you see in business very much these days and I found it rather warming to hear.
Wandering through the bowels of the brewery we saw all the things you’d expect.
Large coppers and fermenters, enormous yeast containers.
Shepherd Neame contract brew Asahi, Kingfisher and Samuel Adams Boston Lager and before you shout out, Sam Adams has always been a contract brewer, and as you can imagine, that’s a lot of beer to make and store, and so it was that just past the yeast containers I entered the Cathedral Of Beer.
A walkway stretches for about one hundred metres through a cavernous room and either side stand the biggest cylindrical containers I have ever seen, creating vast walls of beer.
All of a sudden I felt thirsty. 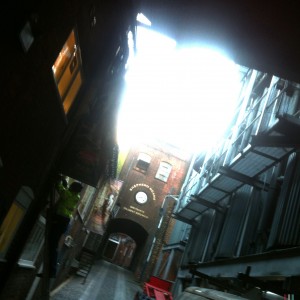 The street that bisects the brewery was once a public highway.

The brewery is split in two by what was once a public road but now takes on the role of bisecting the company into brewhouse and offices, along with a rather lovely bar and events venue and the company’s laboratory, the road now feels a little like Coronation Street, a slightly unreal snapshot of what an old cobbled street might once have been.
We returned to the Micro Brewery in time to move the brew into the copper and add the hops.
Stewart had very kindly added the words “Guest Brewed with Simon Williams” to the top of his brew sheet and after getting me to add the ingredients asked me to sign my initials against each addition as a record of what I had done.
Hops added and the copper coming to the boil John left me and I was taken by Stewart to see some beer being casked.
There were only two or three casks left to be filled on the enormous semi-automated machine and I was given a quick lesson in how the thing worked before being asked to fill and seal the casks.
I managed to get the beer into the first and banged home the seal with a large mallet before being told, “That’s an awfully girly way of holding a mallet. Do it again with a bit more oomph.”
Well that told me.
Stewart and I headed up to his office for a cup of tea and a chat.
He’s been brewing for forty or so years and is a mine of information.
He’s also incredibly forthcoming and the hour we spent flew by as we talked about how he got to Shepherd Neame, how he works out his recipes and the sheer joy he gets from being able to make small batches of beer by hand in his own personal micro brewery. 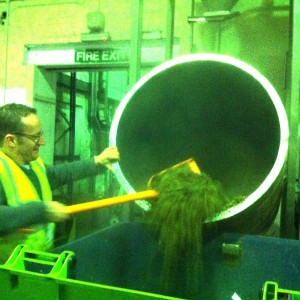 Tea and biscuits done we headed back down to the brewhouse where the beer was to get its second hopping before being moved into its fermentation tank.
That meant one thing.
The mash tun needed cleaning out, and that job was mine.
I was handed a shovel and a bin and told to get on with it as Stewart happily and with a rather cruel gleam in his eye took photographs.
As I sweated away I realised that behind me I could hear voices and turned around to find a group of spectators watching the skinny boy work, but it was all in good sport and reminded me again of how the company has so many family members, school friends, local people in its ranks.
Mash tun cleaned we got the beer into its fermentation tank, added the yeast and started cleaning down the kit.
With perfect timing Moray Neame arrived.
She’s a direct descendent of the Neame family, works in Shepherd Neame’s Public Relations and Events and kindly took me out to lunch. 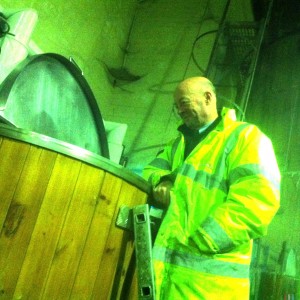 Mr. Stewart Main, Master Brewer, looks at our creation with the smile of a man happy in his work.

We drove over to The Three Mariners, another of the company’s local pubs and I was treated to a delicious lunch of lamb and vegetables with a pint of Master Brew (3.7%).
I understand that some people think that Shepherd Neame’s beers lack hops but I for one found that though I generally prefer something a little more hop heavy, they were fresh and lively and rather tasty so close to the brewery and kept as well as they are by the pubs.
You see the ales brewed by Shepherd Neame are based on traditional recipes where the flavours are more about soft balances between hop and malt, and what I think we’ll find as more beers come out of the Micro Brewery is that’s where the experimental or more modern beers will come.
Small batches, some to bottle but most to cask, of beers that aren’t what we might expect to come out of Shepherd Neame.
Over lunch Moray and I talked about the company and the family and I promised much of the detail of what we talked about wasn’t for publication as I wasn’t so much interested in the details, the facts, as they can be found on the internet should you want them.
What I was most interested in was the feel of the place, how it functions day to day.
The answers I got from Moray were the same as I’d got from everyone else, and I’m pretty sure they were honest. 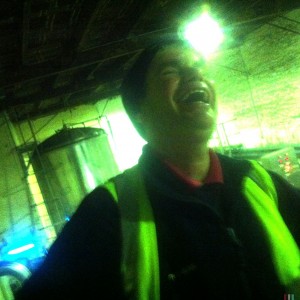 Pete’s laughter as we worked summed up the overall feel of the brewery.

This is a company that prides itself on looking after its staff, that is open and honest about how it performs and what it does, and that was a rather refreshing thing to hear.
If, like the last time I visited a large brewery, Shepherd Neame were doing a media job on me, then they did it very well indeed.
But I really don’t think that they were.
And although I may not buy many of their bottled beers I’ll certainly look at them in a different light, and I’ve yet to try their new IPA and Double Stout which I have sitting in front of me in their lovely amber (brown) bottles, but I’ll be more than happy to drink their beer when I see it in a pub.
It may not be the most exciting beer in the world but it’s well made and effortlessly drinkable.
I caught the train home tired but happy, my first brew day a complete success in my mind.
I’d met yet more nice, friendly people in the brewing industry, been looked after immensely well and had a lot of fun with, and learned a massive amount about beer and brewing from Stewart, a remarkable man and Master Brewer.
What’s more he joined The Campaign For Really Good Beer.

A huge thank you to everyone at Shepherd Neame for their welcome and hospitality, especially to John, Moray, Pete, and most of all to Stewart for his time, patience and enthusiasm.