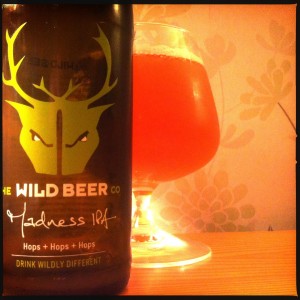 I was initially stuck for where to start with this beer.
It’s a rather brilliant IPA with a massive flavour and it’s presented beautifully.
I’m not overly fond of the blurb on the bottle though, it feels like they’re trying a little too hard, and with a beer this good there’s no need to try at all.
Madness IPA pours a lovely orange marmalade with only a ring of bubbles for a head.
Did I say head?
It’s more of a halo.
And Madness IPA stinks, reeking of super fresh fruit from sun drenched lands and cheap penny sweets, along with a zingy zest in the smell that gets up your nose and stings your eyes.
Trying to drink this beer is like tongue wrestling with a girlfriend made of hops.
She grabs your face, screws your lips up, makes you moan, stings your face, grabs your tongue and bites into it with ferociously sharp mandarins and limes, lemons and grapefruit.
She teases you with fizzy sherbet fun and then mops up your mess with a soft sweet toffee malt that puts some crisply baked bread into your backbone and helps you stand back up before snogging your face off some more and leaving you puckered and gasping with a sensationally dry and beautifully bitter memory as she goes looking for someone more handsome.
You see, with a beer like this there’s just no need for all the hyperbole on the bottle.