You know I love packaging.
And this is super packaging.
Beer Geek’s look and feel is excellent, fun, cool, modern.
The sad thing is I for one had one or two problems with the beer I tried by them.
I’ve been sitting on these reviews for a few weeks wondering whether to publish or not and in the end, having read over them again, I have decided to just put them out there.
I’ll probably get one or two people shouting, some people like to shout, especially given an easy target and the anonymity of the internet, but the reviews here are first and foremost honest, and secondly purely subjective.
There’s an awful lot of good in these beers, especially Great White Geek, but there are also one or two things that I didn’t like.
So here goes. 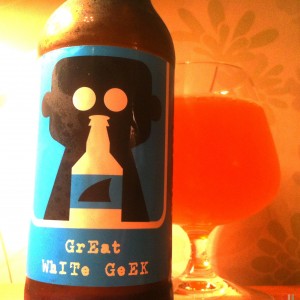 Great White Geek (4.5%)
There’s an awful lot of flavour packed into this little bottle of beer.
The aroma is light and tropical with passion fruit and mango at its core.
You get a little walnut woodiness along with the soft caramel of the malts and just a pinch of cracked pepper piquancy.
But it’s in the hopping that this beer comes into its own.
Huge washes of kiwi, orange, passion fruit and lychee, all very fruity and all very round, fresh and juicy.
There’s only a little lemon and lime here, but it’s just enough to give a light bitterness to the finish.
My only complaint would be that I’d like a little more fizz, more carbonation if you’d prefer a proper term.
All in all though, rather good. 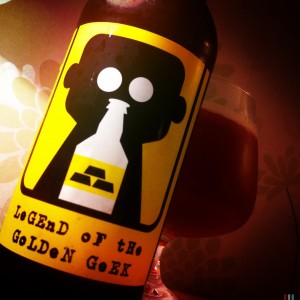 Legend Of The Golden Geek (4.5%)
This Golden Ale is a very nice amber with a foamy head and an aroma that’s mango, passion fruit and wood shavings.
The woodiness continues into the flavour and for me it detracts a little from all the stuff going on in here.
There’s a burned sugar syrup and digestive biscuit malt, and a soft fruity roundness that’s ripe with peaches but as the hops take over with their powerful Bramley apple zing, some camomile tea, and a whole heap of countryside tastes, including blackcurrant leaves and hazelnuts, it’s all stamped on by this very woody and slightly damp straw background that seeps into everything.
The finish is super dry and flecked with black pepper and nettles.
Pretty good, but not quite there for me. 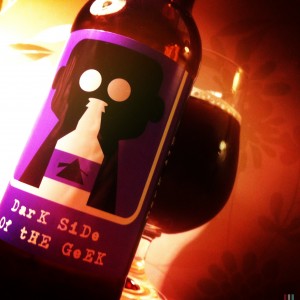 Dark Side Of The Geek (5.5%)
Sadly I’m not overly keen on this.
There’s a lot of good stuff going on but there’s also a background flavour that tastes for all the world like hard tap water which is more than a little bit weird.
And it’s in the smell too.
You get fruits and treacle and a particular aroma that reminds me of running the tap in my old flat in South London.
Taking a sip there’s lots of very nice toffee, a heap of stewed red fruits and sticky molasses along with dry crisp and red autumnal leafy hops.
But there’s this strange and rather off putting hard water thing that swims about over everything else and leaves a mineral heavy aftertaste.
Sorry, but that’s just the way it is.