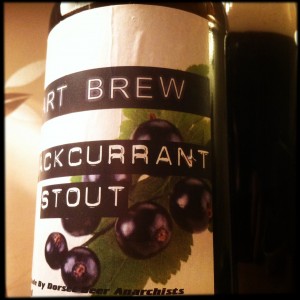 I’m generally not a big fan of fruit beers, I don’t like the bitter sweet sugary fruitiness of them.
Generally.
But this is Art Brew, and they somehow manage to make all sorts of beers that I love.
Some of them ridiculous, like their Christmas Tree Beer.
So they’ve made a Blackcurrant Stout.
A stout with blackcurrants.
And I wonder sometimes if they do this kind of thing specifically to make me eat my words.
But they don’t, because I’m not that important.
I just like to imagine that I am.
So, Art Brew have made a Blackcurrant Stout and it’s delicious.
It pours a lovely purple black with a firm cappuccino head and it smells of coffee and chocolate and fresh-off-the-bush blackcurrants.
I’m not going to talk about hops and malts and stuff.
Instead I’m just going to say the following.
You take a big swig and perhaps it’s not quite as thick as you’d want a stout to be.
Perhaps it’s more a Porter?
But the flavour is superb.
This is a chocolate and rum beer with digestive biscuits, brambles, nettles, and super fresh sweet and sour blackcurrants.
They pop between your teeth and fill your mouth with loveliness.
The finish is hedgerow pithy drynes, bitter at the edges with a fruitiness that’s coated in honey and doc leaves.
All this from someone who doesn’t like fruit beers.