Posted on February 8, 2013 by Simon Williams 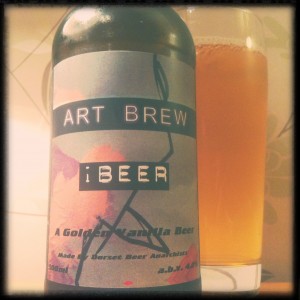 This is a lovely, well balanced, light ale and I could drink it all evening.
However, not only does it bill itself as a vanilla beer it warns that it’s, “very VANILLA.”
Now I wouldn’t want to argue with John the brewer (mainly because he’s a lot bigger than me), but I’m struggling to find anything more than the subtlest hint of said pod.
The aroma of iBeer is super fresh juicy fruits, mandarins and apricots and honey.
The malts are soft shortcake and caramel, a little bit woody and a lottle* bit hearty.
And the hops are succulent greenery, lots of leaves, lots of undergrowth, lots of damp warm places to hide with chewy sweets and a bottle of panda pop.
Humming around in the background is a tiny vanilla pod that adds a subtly rich sweetness.
This is a super beer, it’s just not quite what it claims to be.

*Lottle is the opposite of Little as described by my four year old daughter.

One Response to Art Brew iBeer (4%)