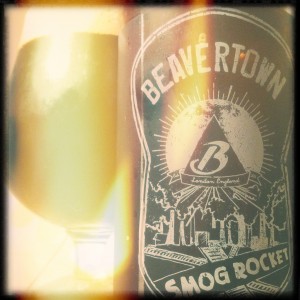 I picked up this little bottle of goodness in Cotteridge Wines and I’d forgotten how much I enjoyed it when I tried it from keg at The Lamb on the Holloway Road last year.
It’s a super little beer that pours as black as pitch with a big cappuccino head and smells of the morning after a bottle of rum in front of a roaring fire.
There’s a bunch of pissed up prunes and sozzled damsons carrying toffee popcorn roaming around in here, but it’s also got a comfortable old fashioned feeling to it.
I stopped smoking over three years ago and I don’t really miss it per se, but occasionally in a pub I miss the warm fog of the snug, laughing with friends over background chatter all wrapped up in cigarette clouds, and Smog Rocket reminds me of those warm fuggy nights that I used to love with all my heart.
Around the edges of this soft focused nostalgia for carcinogenic evenings getting trollied with mates, the hops are crunchy dead leaves and nettles that leave a dry bitter finish and a fat cigar.
It’s seven o’clock on a Saturday morning and I suddenly want to be in the pub twenty five years ago.