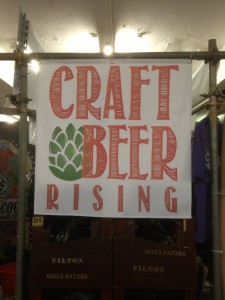 Beer festivals.
We pretty much know what to expect.
GBBF large to local pub small, the format is well understood and largely predictable.
Massed ranks of scaffolding laden with barrels, fronted by a willing band of volunteers who know about beer, but maybe not about the beer that you fancy drinking.

So a craft beer festival was going to be more of the same? Well, in a sense, Craft Beer Rising was more of the same. There was plenty of scaffolding for the barrels and there were plenty of barrels.
But somehow this was different.

The old Truman Brewery building in London’s Brick Lane had an edgy urban feel to it that the usual community hall venues tend to lack. And, to be honest, it felt more like a farmers’ market than anything else. 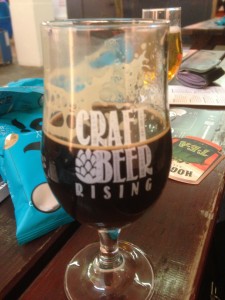 There is a moderately well know market in a north-western city in America where the punters are extolled to “Meet the Producer” and that is just how this felt. Stalls were set up where you could meet and talk to the guys who do the brewing (and the odd guy who does the marketing but there was a refreshing lack of that on the Saturday session which was open to the public rather than the earlier trade sessions). They were a knowledgeable bunch, as you might expect. But you might not have expected them to be so interested in what you thought of their beers.
To a man they were willing to talk and willing to listen. As my significant other said – she had never learnt so much about beer in such a short time

The beers? Counting back, I seem to have had 15 different beers, served in a 1/3 of a pint chalice that will no doubt get plenty of use now that I have successfully got it home, and must have been given nearly as many samples of differing strengths and colours. Some of them were old favourites – Thornbridge served up an excellent Chiron (the Jaipur had sold out pretty quickly seemingly which was, perhaps a surprise given that it is pretty standard supermarket fare these days). 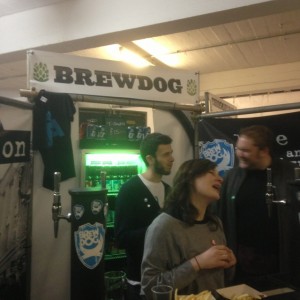 Brew Dog had all that you would expect, so a Libertine Black Ale seemed like a good idea. And it was. Seems that I was in a dark mood, as most of my samplings were porters or dark lagers. Though a few IPAs snuck in there too. Stand out beers? A tweet from @RumandReviews suggested that Rebel Brewing Co’s Mexi-Cocoa was well worth a punt and it maxed out with Maltesers and Ovaltine backed up with a high alcohol wallop.

I think that you could have stuck with the new mainstream in all honesty, Thornbridge, Meantime, Brew Dog and even Marstons and Green King had multiple offerings available, but the less obvious breweries were a joy. I’m not sure that I had heard of Raw Brewing Company before, but their Black Ghost IPA sticks in the mind as does the Sharp’s Hayle Bay Honey IPA which was packed with honeycomb flavour – nice to know that there is more to this Cornish brewery than Doom Bar and that their American owners are really letting them get on with developing a great range of beers.

People? It was good to meet @beerbeauty after following her on Twitter for a while. The folk at both Traquair House and Hogs Back Breweries were stand outs, but then again, nobody stood out for anything bad – which is good to be able to say. I also enjoyed talking to Ben McFarland whose Good Beer Guide to the West Coast USA accompanied us on a recent trip to that part of the world.

Next year? I hope so. And I hope that they don’t change much. The scale and the venue were pretty much spot on. The food seemed to be well received, although I popped to the excellent food stalls in The Boiler House on Brick Lane after the event. There was music on, but whilst you could hear it throughout the venue it never became oppressive – a good thing now I head for my 50s. Things that they could change? Although it was going on, off sales were not officially sanctioned which was a lost opportunity for those enjoying new beers from remote locations. I still managed to evade security and bring my six or so bottles home safely – I would post a picture but that would name my suppliers, so best not.

So, if you get a chance, go. Best beer festival I have been to and it has strengthened my increasing feel for the buzz that is going on in the East of London, from Borough up to Islington there are a string of venues that, when taken with the 4 hour walk it takes to walk between them, provides many opportunities to try some really great beer.