Hogs Back Brewery: This Little Piggy Went To Market 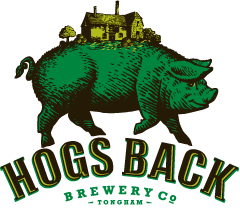 Somehow I feel like I’ve always been aware of Hogs Back, I’ve certainly drunk their TEA many times and enjoyed it immensely. And, right back at the beginning of CAMRGB, a friend wrote a mouthwatering article on his visit to their Brewery Shop not long after which I started seeing advertisements for the brewery in CAMRA magazines and the like. It was these adverts that really piqued my interest in the brewery as I loved the new artwork, the warm playfulness of the new marketing.
And so I decided that I needed to get hold of more than just a glass of TEA and that it might be nice to have a chat with the brewery about who they are and what they do.
I spoke to David Paterson and began by asking him for an overview of the brewery, 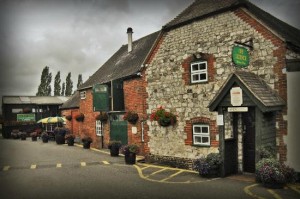 “We are Hogs Back Brewery and it’s our 21st Birthday this year! We are, if you like, probably one of the first of the new wave of Real or Craft breweries dedicated to brewing really high quality products that focus on taste rather than on being volume driven. We are based in Tongham – the brewery sits in Farm buildings that date back to the 18th Century. The name comes from the Hill in whose shadow we sit – the Hogs Back – and we are in between Farnham and Guildford in an area previously famous for producing hops. Our best known beer is TEA (Traditional English Ale) and the over-riding character of our ales is a strongly malty but balanced feel –we have been described as a brewer of “Generous Beers” and the quality of our produce and methods (we dry hop still) means we can be incredibly consistent and really under-pin our ethos of quality. We really care about our beer”.

The brewery began in 1992 with its first brew in the August of that year, and now in their Anniversay year they have,

“[…] a number of plans to increase both capacity as well as introducing our own Barley and Hops on fields that adjoin the brewery. We may also keep our own pigs and re-cycle our spent grain and turn it into bacon! We’ve always brewed on this site and have no plans to move.”

I wondered, as I often do when talking to beery people, if they’ve always worked in the industry and was told that the MD has in the past owned Hob Goblin, Old Speckled Hen and Brakspeares, and that the co-owner was formerly a motorcycle mechanic for a major race team and that,

“Our Head Brewer Miles Chesterman used to brew Carling for Coors so has had a significant change of scale!”

I remembered Hogs Back being bottle conditioned in the past and was interested to know why the brewery has decided to filter. The answer was simply consistency as David explains, 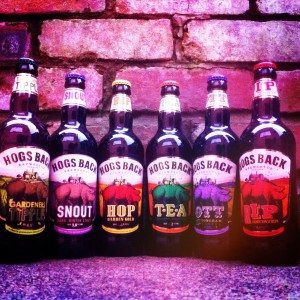 “We filter our beers having previously bottle conditioned. […] What it really comes down to is consistency. Whilst our beers when bottle conditioned were great, there were too many variables relating to both keeping and ensuring that the product when served was as good as we require it to be. Those unfamiliar with bottle conditioned ales often remarked on the sediment and perhaps saw it as an issue with the beer. By filtering we know that what we put in is consistently good and comes out as we would want – bright TEA every time. I think that I am personally unconvinced about the need for conditioning in bottle and have had as many bad beers bottle conditioned as I have good. I’m not sure that all products benefit from that slow ageing process anyway – although ours with that malty character invariably came up superbly, that hasn’t always been my experience.”

As a Graphic Design nerd I’m really interested in the rebranding of Hogs Back, as I’ve already mentioned it was the new look that brought the brewery back into my radar, 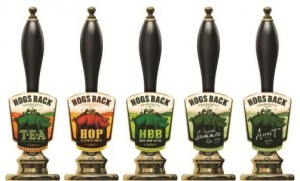 “We felt that our branding was not adding to the appeal of our beer. It looked dated on pump as well as on the shelf and meant that our brands blended into the background […] The new branding does several things: It gives us a “family” look to all our ales, allows us to introduce colour and a bit of humour to our packaging and really makes us eye-catching, especially on the bar. And it doesn’t stop there, our seasonal range takes the packaging on a stage and is even more modern and impactful I believe We work closely with our customers and take on board their feedback too and it seems to be working really well for us.” 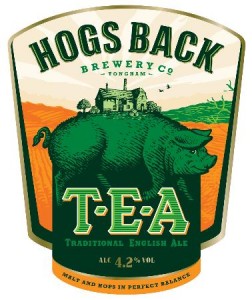 We finished our conversation with the inevitable question of what the future holds and for Hogs Back that’s an awful lot. I’ll let David explain,

“For the brewery our plans are to expand our production. For the brands we are looking to expand and launch at least two other products this year starting in March with a cloudy cider, “Hazy Hog” which we are hugely excited by. It’s a cider that really will appeal to people who want to drink proper cider and not the ubiquitous brands currently on offer. A cider for a particular type of palate definitely but fitting neatly into our ethos of being crafted and top quality. “

And with that I got on with drinking their beer. 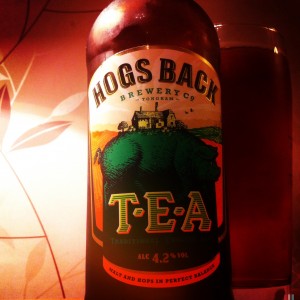 T.E.A. (4.2%) I suppose this is Hogs Back’s signature beer, and what a good beer to have as your signature brew. Pouring a deep amber with a light head, T.E.A. smells of cider apples, toffee and damp hedgerows. The flavours follow suit with a malt that’s sticky sugar syrup at it’s base, lots of spiky cracked black pepper and a delightful hit of runny honey coated biscuit. The hops are green leaf tea, nettles, blackcurrant leaves, a little citrus bite, some very nice apple and pear juice before a good crisp bitter and dry finish. T.E.A., or Traditional English Ale, is very good indeed. 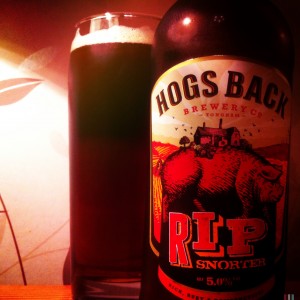 Rip Snorter (5%) Hogs Back’s Ruby Ale is well named, a beautiful deep red beer with a light head and a smell that’s full of red fruits and biscuits. This is a malt heavy beer with lots of bran rich digestives smothered in toffee, stewed plums and cherries. There’s a little liquorice meatiness here, and some spiky cracked black pepper before the crisply bitter and delightfully fresh hops come in with bunches of green leaves, brambles, all sorts of hedgerow goodies that lift Rip Snorter into a whole new place and leave you with a finish that’s good and sharp, bitter and fresh. 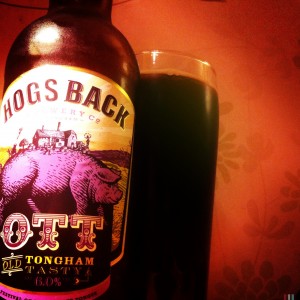 Old Tongham Tasty (6%)
I love the fruits in this.
In fact I could almost leave the review of this beer at that one sentence.
But I won’t because I like the sound of my own pen.
Old Tongham Tasty, or O.T.T., is a rich dark ale that grows bigger with each mouthful.
It pours a deep chocolate brown with only the faintest trace of a head and smells of plums and chocolate and rum.
The malts, of which there are several, work together to create a fruit and nut chocolate bar packed with raisins and prunes, dark bitter chocolate and a layer of toffee that’s heavy with alcohol that warms you through before the hops move in.
The hops here are Fuggles.
Lots and lots of Fuggles.
Often laughed at by craft beer types, in this setting they make perfect sesne with their dry straw and English hedgerow snappiness.
They bring nettles and dandelions and a soft elderflower that leaves a finish that’s sharp and clean while allowing enough of the malts back in to make everything soft and gooey. 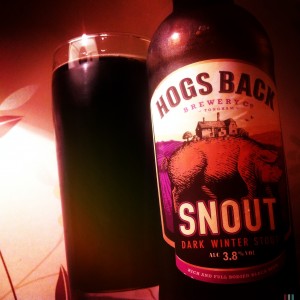 Snout (3.8%) From the blurb on the label of this beer I was expecting something very different to what I got when I poured and took a mouthful of Snout, which is Hogs Back’s Dark Winter Stout. That’s not a criticism as it goes, it’s just this beer wasn’t the chocolate tinged stewed plum beast I thought it would be. Instead this is a warm and rather meaty (in a Marmite way) beer with lots of burned toast, some liquorice and a side order of prunes. The hops are mown grass and dandelion leaves and the finish has a soft round sharpness that’s oddly comforting. 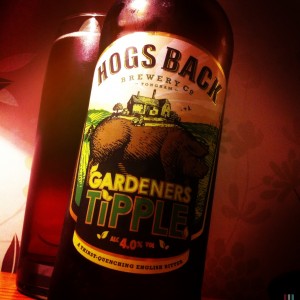 Gardener’s Tipple (4%)
This is a really decent bitter brewed for the RHS garden at Wisley to celebrate their centenary.
It’s a deep amber beer with a light head that doesn’t hang around long.
There’s a big fruity smell that’s backed up by a rich caramel and as you take a mouthful this plump toffee apple aroma continues into the flavour.
You get a nice woodiness too, with lots of hazel and a little pine resin that glues everything together.
The hops are green and fresh and snappy, mown lawn clippings and some floral garden borders.
But there’s also a rather nice oiliness that helps Gardener’s Tipple slide down all too easily leaving behind a soft, dry finish.
My only complaint would be that the bottle’s missing an apostrophe. 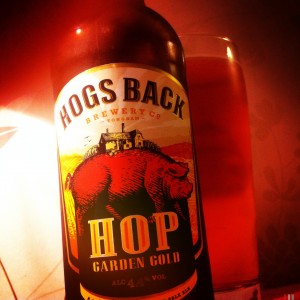 Hop Garden Gold (4.4%)
As I drank my way through this thoroughly enjoyable golden ale I kept tasting a specific flavour that I couldn’t put a name to.
It lasted the whole pint and then, as I savoured my last mouthful, it came to me.
Linseed.
The malts in this sunny beer taste of linseed biscuits, a little shortcake, caramelised sugar and bruised apples.
Hop Garden Gold’s aroma is honey and maple syrup and there’s a nice fizz on your tongue as you drink.
The hops are all English, hazel stems and bramble, apple juice and mace, and the finish is a long dry bitter sweet elderflower.
Intriguingly there’s a rather nice fresh raw carrot earthy blast hidden away in here too.
This may have just become my favourite Hogs Back beer.

I would like to thank David and the Hogs Back team for their time and generosity.