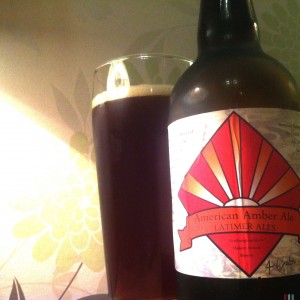 This is a very  ice toffee rich malt powered beer but as with Latimer’s US Pale Ale, I’m struggling to find something that makes this an American style beer rather than a good English Brown Ale.
American Amber Ale pours a nice chestnut brown with only a ring of a head and smells of digestives and peppery toffee.
The malts are the main act with lots of caramel and honey, crushed peppercorns and a little apple juice, while the hops provide a prickle of dried nettle leaves and a squeeze of lemon.
If I had to compare this to an American beer it’d be Brooklyn Brewing Co’s Brown Ale rather than any of the resin rich, maple sticky Amber Ales that the USA does so well.
As with my review of Latimer’s US Pale Ale, this is a rather good beer, it’s just not really what it claims to be in terms of flavour.