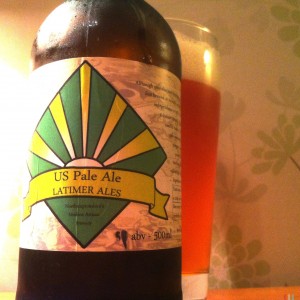 Latimer Ales are a new local-ish brewery to me, based just down the road in Northamptonshire, and this is the first beer I’ve had from them.
US Pale Ale is brewed, as you would expect, with American hops and a pale malt, and pours a light amber with an exceptionally frothy head.
You know the type, a head made up of big and tightly packed bubbles, the kind of head you only get on a bottle conditioned beer with an extra feisty yeast.
The aroma is very subtle indeed and I’m a little surprised at how light the flavours are too.
You see, I’ve come to expect something a bit bigger from American hops but this is all a bit subdued.
Not bad, just subdued.
There’s a super light grapefruit that swishes about over some very nice caramel and biscuits, and there’s a slightly spicy bite.
But personally I’d like a bit more of a punch right in the middle.
The finish is soft honey with a decent bitter dryness, but for an American style Pale Ale this far more like an English Real Ale.
And not a bad one as it goes.
Just not what I was expecting to be drinking.
I have some of Latimer’s other beers lined up to try and I’m interested now to see how they turn out.